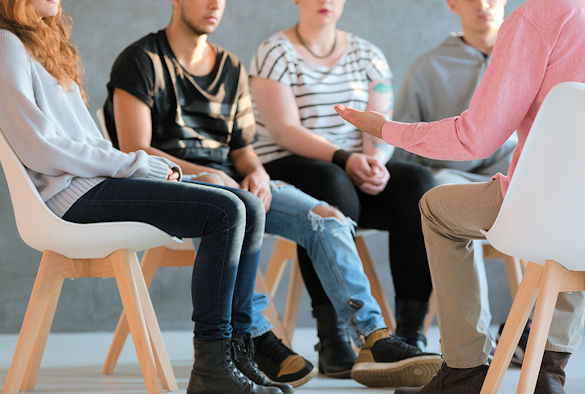 New research, published in The Lancet Child and Adolescent Health, has found that adolescents from sexual minorities (those attracted to same sex or both sexes) in the UK are more likely to experience mental health problems, adverse social environments and negative health outcomes in contrast to their heterosexual counterparts.

The research aimed to rectify the lack of contemporary UK data in Generation Z (people born between 1995 and 2015) regarding the disparity in adverse outcomes faced by sexual minority young people who have grown up in this Century – a time of advances in rights for sexual minorities.

In order to gain a better understanding of these outcomes researchers from the University of Liverpool and University College London analysed information on almost 10,000 adolescents born between 2000-2002 who are taking part in the Millennium Cohort Study (MCS).

The researchers found that sexual minorities were around five times more likely to experience high depressive symptoms (54% vs 15%) and self-harm (54% vs 14%). They also had lower life satisfaction (34% vs 10%), lower self-esteem and were more likely to experience all forms of bullying (i.e. peer bullying 27% vs 10%) and victimisation (i.e. sexual assault/harassment 11% vs 3%) .

The lead author, Rebekah Amos, said: “Our current study provides much needed population-based estimates indicating pronounced differences in mental health, social, and health-related outcomes between sexual minority and heterosexual adolescents in the UK. We find that sexual minority adolescents are five times more likely to be depressed and self-harm and 2-3 times more likely to be bullied and be victimised, illuminating the scale of current adversities this group of adolescent are facing.”

Dr Praveetha Patalay, study co-author, said: “The study exposes the vast disparities in a range of outcomes between sexual minority and heterosexual young people, highlighting the need for further prevention efforts and intervention at the school, community and policy level to ensure sexual minority adolescents do not face lifelong adverse social, economic and, health outcomes.”

Dr Ross White, clinical psychologist and study co-author, said: “The study findings highlight the need for mental health professionals, teachers, parents and young people to work together to co-create systems of support that will allow young people to flourish irrespective of their sexual orientation. An important aspect of this work will be to foster societal attitudes that celebrate diversity, recognise common humanity and nurture compassion for one-self and others.”

Rebekah Amos added: “Despite high profile policies such as the legalisation of same sex marriage in 2013 in England, Wales and Scotland and the introduction of sexual orientation as a protected characteristic during these adolescents’ lifetime, the evidence presented here indicates that large inequalities in social and health outcomes still exist for sexual minority adolescents growing up in the 21st Century.” 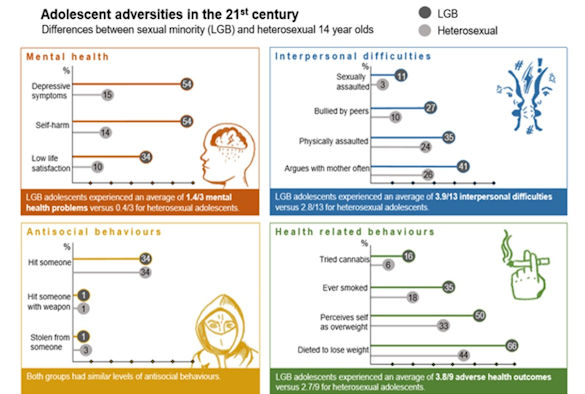