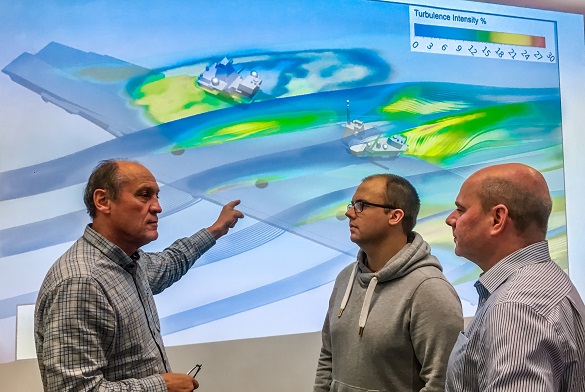 Neale Watson, a School of Engineering PhD student, has been selected to attend Parliament in March to present his research to Members of both Houses and a panel of expert judges, as part of the STEM for Britain event.

In the only national competition of its kind, STEM for Britain aims to encourage, support and promote Britain’s early-stage and early-career research scientists, engineers, technologists and mathematicians who are an essential part of continuing progress in UK Research & Development. The competition attracts over 500 entrants, of whom approximately one third are selected to present their work in Parliament.

Neale, who has been shortlisted to attend, will present how computational aerodynamics research and High-Performance Computing conducted at the University of Liverpool has been used to inform flight trial preparations of the Lockheed Martin F-35B Lightning II, the world’s first supersonic stealth Short Take-Off and Vertical Landing fighter jet, with the HMS Queen Elizabeth aircraft carrier, the largest ship ever built for the Royal Navy.

Prize-giving
This prestigious annual event, which is attended by a significant number of Members of Parliament and Peers, is sponsored by Stephen Metcalfe MP, Chair of the Parliamentary and Scientific Committee. Awards are made on the basis of the very best research work and results by an early-stage or early-career researcher and their ability to communicate to a lay audience.
Neale will be entered into the subject specific engineering session during the competition. Judged by leading academics and industrial representatives the gold medallist receives £2,000, while silver and bronze receive £1,250 and £750 respectively.

A wide range of important scientific, engineering and mathematics institutions and organisations are lending their support to this event, including the Royal Society of Biology, The Physiological Society, the Royal Society of Chemistry, the Royal Academy of Engineering, the Council for the Mathematical Sciences, the Institute of Biomedical Science, the Clay Mathematics Institute, the Nutrition Society, the Heilbronn Institute, the Institute of Physics, Warwick Manufacturing Group, United Kingdom Research and Innovation, the Biochemical Society, and the Society of Chemical Industry.

STEM for Britain takes place on Monday, 9 March, More information can be found at: www.stemforbritain.org.uk