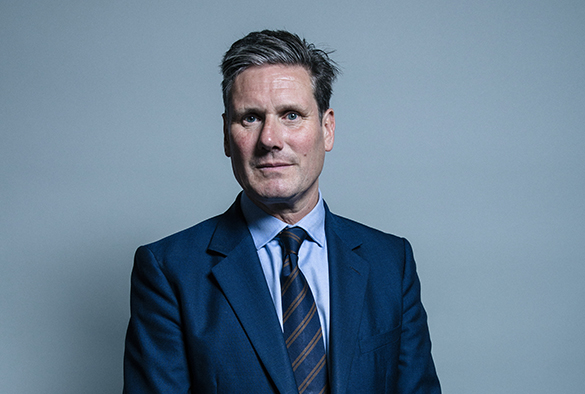 You would be forgiven if you missed the news that Sir Keir Starmer is the new Labour leader. In the midst of a global pandemic, there was no special conference. No ambitious speech delivered to an amassed crowd of Labour members and journalists. Instead, an email was sent around to members and journalists announcing the result of who would replace Jeremy Corbyn. Starmer’s pre-recorded victory speech was duly posted to social media.

Starmer was the frontrunner throughout the contest. By clinching victory in the first round, with 56.2% of the vote, his status as the favourite was backed by the result. Momentum-backed Rebecca Long-Bailey achieved 27.6% of the vote, with Lisa Nandy finishing last with 16.2%. There is no doubt Starmer’s victory is impressive and gives him considerable authority, but it does not quite eclipse Corbyn’s own margins of victory (59.5% in 2015 and 61.2% in 2017).

The most immediate focus will be on working with the government to tackle the coronavirus outbreak in the country. Starmer has been clear on his intention to work constructively with the ruling party. However, there is a fine line between working with the government on an issue of national interest, and being too closely associated with the Conservatives. COVID-19 will continue to dominate the news over the coming months, Starmer will need to establish his position in much different circumstances than anyone could have anticipated when the leadership contest began.

Crucially, the former Director of Public Prosecutions is well liked by the majority of Labour members and amongst his colleagues in the parliamentary party. The emphasis will now be on uniting the various Labour factions. ‘Divided parties do not win elections’ is a phrase that will be fixed in the mind of the new Labour leader.

Anti-semitism has been a contentious issue during recent years and featured heavily in the leadership campaign. In his pre-recorded acceptance speech, Starmer apologised for antis-emitism in the party, promising to ‘tear out this poison by its roots’. It presented a clear message on a subject that continually dogged Labour under Corbyn’s leadership.

The first real sense of Starmer’s strategy will his appointments in the shadow cabinet. Will he attempt to bridge the party by including Corbynistas in key shadow cabinet positions? It is expected that defeated rival and favourite of the left Rebecca Long-Bailey will remain in the shadow cabinet at some level. Key figures associated with Corbyn’s leadership, John McDonnell and Diane Abbott resigned before Starmer’s win was announced.

Unveiling his top team on Sunday afternoon suggested that Starmer is looking to the future. Yes, it signalled a clear break with Corbyn’s leadership, but neither was it a return to familiar MPs seen in the Miliband or Brown days. Elevating newer MPs to positions of seniority demonstrates Starmer’s desire to look forward. In addition to Starmer himself, New Shadow Chancellor, Anneliese Dodds and new Shadow Home Secretary, Nick Thomas-Symonds have only been MPs since 2015. Lisa Nandy completes the senior positions as Shadow Foreign Secretary and is the longest serving MP out of the four, having been elected in 2010.

The electoral challenges facing the new Leader are stark. After the fall of the ‘Red Wall’ in the 2019 Election, Labour must reach out beyond metropolitan areas, where so many of its MPs are now concentrated. In addition, Labour has a significant task in winning back seats in Scotland. Only ten years ago, Scotland had 41 Labour MPs. Now Ian Murray is Labour’s solitary MP north of the border. Much of the discussion during the leadership campaign was that Labour had become too London-centric. Starmer who is a Londoner and represents a London constituency may lack the same authenticity that his two northern leadership rivals had on this subject.

It is clear the new Labour leader has a mountain to climb, but as Lisa Nandy pointed out, Labour’s road back to power may be steep, but it does not have to be long.

For all the latest news and insight, follow @livuninews