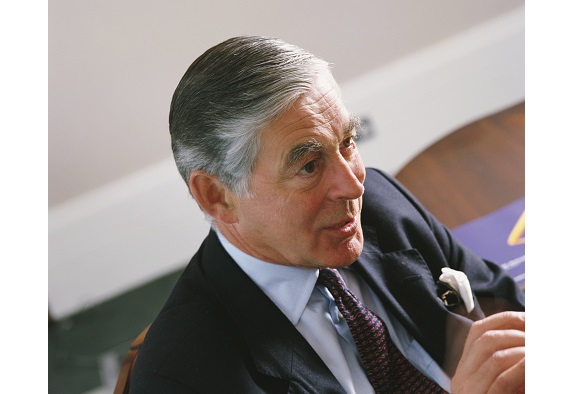 The University is saddened to learn of the passing of Sir David Barnes CBE (Hon LLD 1996) at the age of 84.

He began a BVSc degree at the University of Liverpool, with the intention of fulfilling his early ambition to become a vet, but did not complete his studies, instead leaving to start a career at ICI. He was knighted for services to the pharmaceutical industry in 1996, and in the same year was made an honorary graduate of the University of Liverpool.

Sir David made several visits to the University’s Veterinary School and did a tour of the Leahurst campus last year. Sir David was always interested in the veterinary activities at the university and particularly enjoyed seeing the new advances in technology and treatments available for animals. He was a staunch supporter of animal welfare as well as having a keen interest in veterinary education.

Professor Susan Dawson, Dean at the University’s Institute of Veterinary Science said: “Sir David was a quiet and kind man and it was always a pleasure to meet with him. He had a great deal of interest in what we did in particular in the hospitals and was very knowledgeable and up-to-date with advances in treatments for animals. He will be sadly missed by everyone at the vet school and our thoughts are with his family and friends at this sad time.”

Sir David was a former member of the University’s fundraising board and was President of the Small Animal Teaching Hospital appeal, completed in 2007.

Christina Turner, Director of the Development and Alumni Relations Team, added: “Sir David always recognised his link with Liverpool and was a generous and passionate supporter of our work at Leahurst and across the University. We will miss him greatly.”

Sir David served as a Trustee of numerous charities including the Ashridge Business School, Thames Valley Hospice and the Fundraising Council of the Voluntary Services Overseas (VSO).  He was also a supporter of Cancer Research UK and the British Red Cross. Married to Fiona, the couple have two children and five grandchildren.

An oration from his honorary degree from 1997 is available to view here:  https://alumni.liv.ac.uk/images/uol/1997-jan-veterinary-alumni-news.pdf

Please contact Mark Horne on mark.horne@liverpool.ac.uk if you would like to be notified when Sir David’s service of remembrance is scheduled.