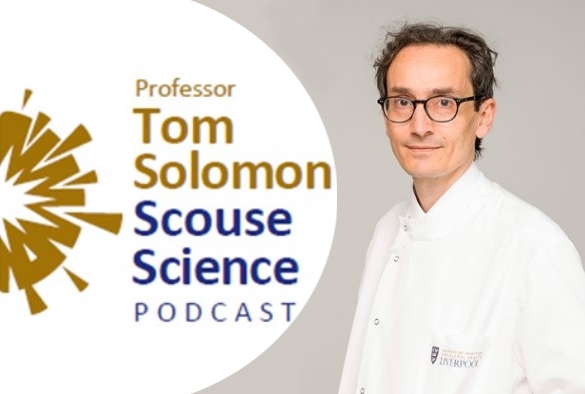 Award-winning science communicator, doctor and infectious diseases researcher Professor Tom Solomon is launching a new video podcast series looking at COVID-19 and its impact on science and society in Liverpool.

The Scouse Science Podcast will be broadcast live and see Tom talking to leading Liverpool researchers about scientific progress being made to tackle the virus and chatting about the wider impact of the pandemic with some famous local faces.

Professor Sally Sheard is a health policy analyst and historian at the University of Liverpool, with a research focus in the interface between expert advisers and policymakers. Her latest research looks at the dynamics of policy development and healthcare worker behaviour in the UK during the COVID-19 public health emergency.

University of Liverpool honorary graduate Frank Cottrell-Boyce is a children’s novelist and screenwriter who won the Carnegie Medal for his debut novel – Millions – in 2004 and the Guardian Children’s Fiction Prize for The Unforgotten Coat in 2013. Millions was made into a film by Danny Boyle, for whom Frank went on to work as the writer for the 2012 London Olympics Opening Ceremony.

Scouse Science will be broadcast as a live webinar via Zoom and Facebook, with an audio podcast made available afterwards.