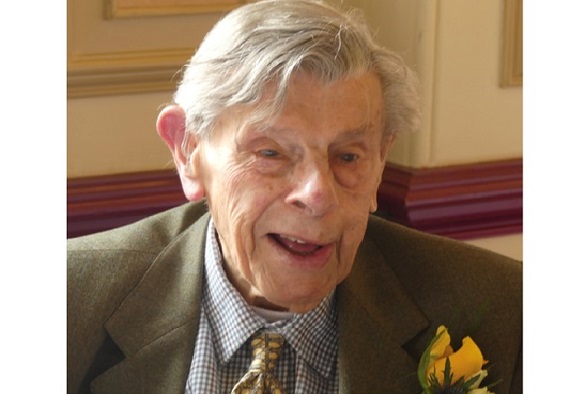 The University is deeply saddened to learn of the death of Dr H. H. Burchnall OBE, former Registrar of the University, who died at the age of 101 on 20th May 2020.

The following obituary has been prepared by Shane Guy, former member of the University of Liverpool administration and former Secretary and Registrar of Goldsmiths’ University of London:

Dr H.H. Burchnall, doyen of University Registrars, died on 20 May in his 102nd year. An outstanding representative of the nation’s universities as recognised in the second half of the twentieth century he was admired also as someone who loved Liverpool and worked tirelessly behind the scenes to alleviate the difficulties it faced during his 22 years tenure as Registrar of the City’s university.

Herbert Burchnall, was first educated at Haileybury (in which he maintained a lifelong interest) between 1933 and 1938. Accepted for Oxford he served for much of the War in minesweepers in the Mediterranean, being Mentioned in Despatches, before going up to Christ Church, where he was a Boulter exhibitioner.

After a brief period working for the Joint Matriculation Board in Manchester he joined the University of Liverpool in 1951 becoming Registrar in 1962. He became one of a small group of Registrars in the 1960’s and 70’s who set the style and values which for some decades were regarded as the gold standard for administration in the complex institutions which are the great universities. He had an intuitive understanding of their underlying disorder represented by constantly competing disciplines and egos; and that an important, but unsung role, of the Registrar was to bring a sense of orderliness and civility into whatever was done. He did this while retaining the admiration and affection of his own colleagues and of the staff and students across the University. His qualities of kindness and care for others were manifest. He was always anxious to acknowledge the contributions made by colleagues. He would sign letters of appointment and promotion personally and often visit staff members to discuss in person points in their letters or papers. This carried a substantial dividend as it established many strong relationships, and claims that he was by far the best informed member of the university of the minutiae of life in departments distant from the Senate House.

He was always conscious of the deprivation in Liverpool and encouraged staff to take a part in City life, encouraging them to serve the community in positions where they could bring their personal expertise to bear. Following the Toxteth riots of 1981 Michael Heseltine promoted the International Garden Festival. In the early days, when the then city council leaders were less than enthusiastic, Burchnall ensured the University provided living accommodation for its senior staff and the early meetings of its steering committee took place in Staff House. Over 400 members of the university were to contribute to the festival in roles stretching from the University’s Botanic Garden at Ness providing countless bedding plants and young trees to advice on ground conditions and assisting in public information.

Burchnall’s contribution was not limited to the City and University that he loved. He was regularly asked to advise other institutions, was an active member of the Conference of Registrars and Secretaries, and played an important role in the creation of the North Western Universities O and M Unit – later the North West Universities Purchasing Consortium. No fewer than nine Registrars who were to serve other universities came from his stable.

The Arts were an important aspect of his life. In Liverpool his advocacy for Merseyside’s Art Galleries and Museums being granted national status was important to him. Until he was 99 his support of the Queen’s Hall recitals in Edinburgh was such that he would, during the Festival, invite friends from Liverpool days to join him either in person or via Radio 3. At 100 his plan for 100 guests at his celebration was narrowly missed partly owing to a sudden snow storm on the day (a rare failure) but at 101 he was still emailing and telephoning old friends and colleagues.

Burchnall’s wife, Ann, died in 2005. He is survived by his sons Michael and David with their families, including 5 grandchildren.