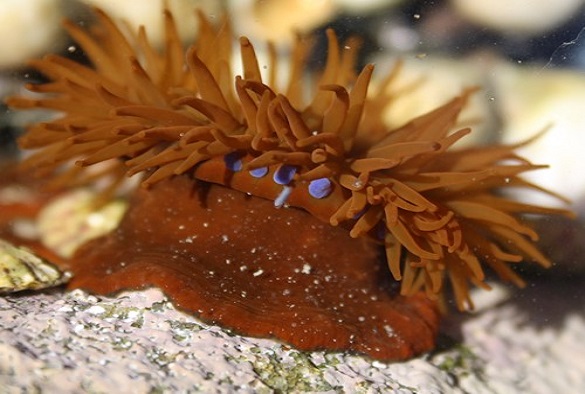 Many of us enjoy rock pooling when the tide is out but new research reveals that high temperatures can have a damaging effect on the pool’s inhabitants.

In the UK and around the world, extreme temperature events – or heatwaves – are on the rise, yet little is known about the effects these extraordinarily high temperatures have on shore animals.

Researchers from the University’s School of Environmental Sciences undertook a study of rising temperatures on the behaviour of a popular sea-shore animal, the beadlet anemone (Actinia equina), the dark red jellylike blobs often spotted around the shores of the UK.

Their study found that some individuals were worse affected than others by unusually high temperatures. It also revealed that anemones that live lower down the shore, where conditions usually don’t change as much, kept their tentacles retracted for longer periods as the temperature rose compared to those from further up the shore. This means they would have had less time to feed in a real heatwave

Daniel Maskrey, a PhD student with University’s School of Environmental Sciences and first author of the study, said: “This is the first time such changes in behaviour in sea anemones have been examined in the context of climate change. These findings have serious implications for these anemones and potentially other animals.

“We are seeing more extreme weather events and rising temperatures, and these seem to drastically affect low shore animals more than those higher up the shore. This may mean some animals perish in the face of extreme heat waves which could reduce diversity on the seashore”

Dr Jack Thomson, the senior researcher and head of the Marine Animal Behaviour Lab in Liverpool, where the study was conducted, added: “These studies on climate change and temperature are crucial for us to understand how animals will cope with increasing environmental change. We can then target our conservation strategies towards those animals that are more affected”

The project, run in partnership with Blue Planet Aquarium, provides new insights into how sea-shore animals cope with heat waves.

Curator of Blue Planet Aqaurium, Dave Wolfenden, said, “Public aquaria have a duty to understand the impact of a changing climate on the species we hold in order to improve conservation attempts. This valuable information also enables us to improve the way in which we keep these anemones by understanding what temperatures are optimal”

The paper `The impact of personality, morphotype and shore-height on temperature-mediated behavioural responses in the beadlet anemone (Actinia equina)’ (doi: 10.1111/1365-2656.13301) is published in The Journal of Animal Ecology.