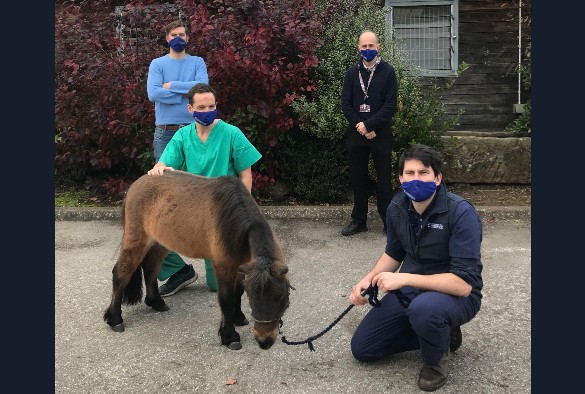 Clinicians at two of the University of Liverpool’s veterinary teaching hospitals are celebrating a lockdown success story, involving a special patient called Duncan.

While many of the University’s departments have come together to fight the COVID-19 pandemic over the past few months, surgical teams from both the equine and small animal hospitals at Leahurst came together to take on a very different challenge in performing what is believed to be the world’s first successful total hip replacement in a horse.

Duncan, an 85kg miniature horse, was first admitted to the Philip Leverhulme Equine Hospital in July this year for investigation of severe hind limb lameness. A CT scan confirmed fears that Duncan had dislocated the left hip joint and damaged it irreparably.

The procedure had been attempted in small ponies before, however, all known previous attempts had failed. The surgery required careful preparation and the combined knowledge of specialists in both small animal and equine surgery, as well as colleagues from the anaesthesia and internal medicine departments.

Working together, the teams were able to replace the left hip of Duncan using state-of-the-art implants that are designed for use in large dogs.

Equine Surgical Resident, Matthew Cullen said: “Although always complex, hip replacements are relatively common in dogs, so the experience of the small animal surgeons was absolutely vital as Duncan presented a highly unique challenge. Despite that he has made an excellent recovery and was able to walk and trot almost normally at his last check up!”

Duncan was hospitalised at Leahurst for over three weeks and required round-the-clock supervision in the first few days after surgery. As he grew stronger, physiotherapy formed a large part of his postoperative care and the team worked closely with Chartered Veterinary Physiotherapists Katie Meredith, and Suzanne Cottriall to help Duncan get back on his feet.

Matthew added: “It seems glib to describe this as a team-effort, because all of the cases we see are, but this case genuinely reflects the hard work of lots of people from many different departments. All staff at the equine hospital were involved in Duncan’s care at some stage of his treatment and it was a fantastic experience to work with the surgeons and nursing team from the Small Animal Teaching Hospital.”

Professor Rob Pettitt said: “The opportunity to provide Duncan with a normal life using a procedure that we perform regularly in dogs but that has never been successful longer term in equids was a unique experience. Our role as surgeons was just a small part of the huge teamwork that has resulted in this successful outcome.”

Dave Stack added: “I would like to express my gratitude to all who contributed to the success of Duncan’s recovery, not least Rob Michael of Thompson House Equine Clinic, Duncan’s vet at home, whose care of him has been invaluable. I am thrilled that Duncan will live a comfortable life and delighted that Duncan’s owners have the opportunity to continue to spoil him for many years to come.” 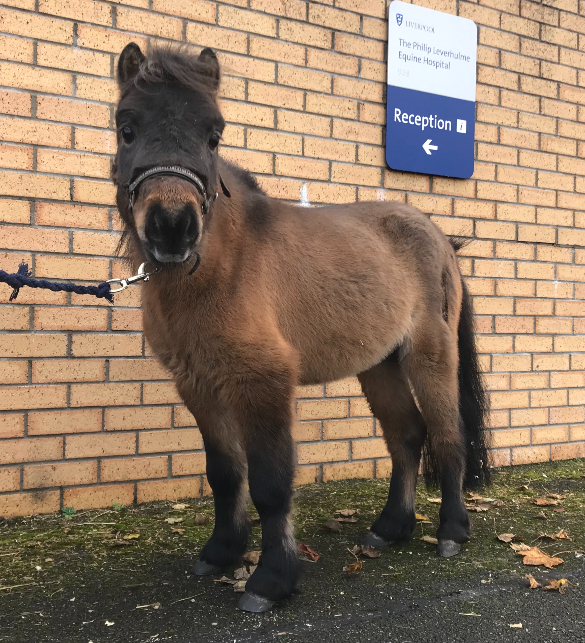