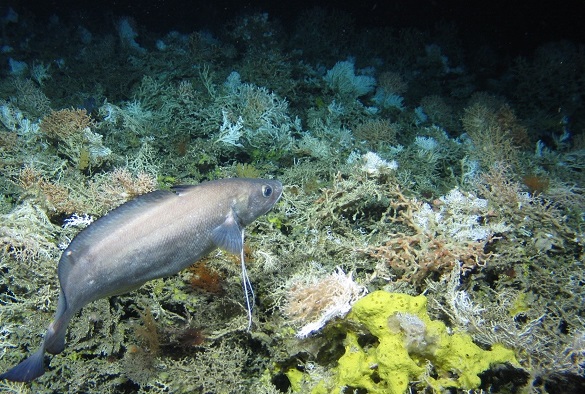 A landmark project to undertake the largest and most ambitious study of the Atlantic Ocean’s vast depths has reported its key findings which include the discovery of 12 new species, greater insights into biodiversity and improved understanding of the damaging impact of climate change.

The ATLAS project is the most in-depth assessment of deep-sea ecosystems to date and involved scientists from the University of Liverpool as part of a team of 80 researchers from countries bordering the North Atlantic.

The project findings lay the foundations for efforts to safeguard the ocean for future generations and also provide governments and industry with tools to help ensure the ocean’s resources are used more sustainably.

Over the past four years, ATLAS scientists have participated on 45 research expeditions making a step change in knowledge on North Atlantic deep-sea ecosystems. Deep-sea ecosystems, however, are under high risk. ATLAS showed that large-scale Atlantic Ocean circulation i.e., the Atlantic Meridional Overturning Circulation has slowed down exceptionally over the last 150 years due to climate change.

ATLAS research has led to the discovery and description of 30+ seabed communities and the description of at least 12 new species including Myonera atlasiana named after ATLAS.

The project also assessed the economic and social value of the deep sea and found that there was strong support among the public for more sustainable ocean management strategies.

Professor George Wolff, an expert in ocean chemistry, was the University of Liverpool’s lead investigator on the project.  He said: “We can still say we have better maps of the surface of the Moon and Mars than of the sea floor. So whenever you go to the deep ocean, you find something new – not just individual species but entire ecosystems.”

Professor J Murray Roberts, from the University of Edinburgh’s School of GeoSciences, and co-ordinator of the ATLAS project, said: “Everyone knows how important it is to look after tropical rainforests and other precious habitats on land, but few realise there are just as many, if not more, special places in the ocean.

“In ATLAS we’ve studied most vulnerable ecosystems in the deep Atlantic and we now understand how important, interconnected and fragile they really are. We also discovered that people across the Atlantic want to see healthy deep-sea ecosystems for their children and grandchildren. The challenge for the next decade will be taking this new scientific and social understanding and using it to create better plans and policies for truly sustainable human activities in the ocean.”

Dr Jake Rice, of Fisheries and Oceans Canada and Chair of the ATLAS Advisory Board, said: “When invited to Chair the ATLAS Advisory Board, I was attracted by the scope of the challenge being taken on, the breadth of disciplines comprising ATLAS, the depth of the expertise of the researchers, and the opportunities this mix presented. It is a highlight of my career to have been able to play even a small role in the achievements of ATLAS and share in its legacy.”

The €10 million iAtlantic project which began in 2019 – is building on the pioneering work of ATLAS by using the latest technologies to assess the ocean’s health, and helping governments create policies to better protect