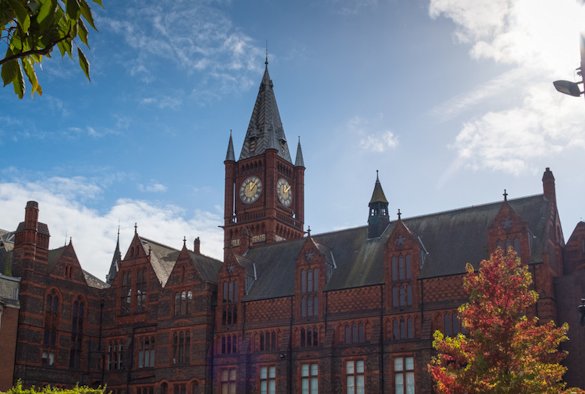 Author, Charlotte Fisher, is a 1st year English Literature student at the University of Liverpool.

As a first-year student who has yet to set foot onto the University campus, the Victoria Gallery & Museum was to be my first taste of the myriad of memories yet to make over my remaining two years. I took my first steps into the beautiful redbrick building so established in the depictions of the university that prospective students know so well. I was met with smiling faces as I greeted the VGM staff and began to chat about a year lost! I spoke to Di, one of VGM’s wonderful staff members who told me: ‘The VGM is really amazing…it’s often overlooked on the campus, but people really love it when they get the chance to visit. It’s a beautiful and unique asset and a vital part of the University of Liverpool experience.’ To visit, book your ticket here.

The history of the VG&M

This beautiful building, designed by Alfred Waterhouse, was opened as the Victoria Gallery & Museum in 2008 in alignment with Liverpool winning European Capital of Culture. The initial fundraising for the building to be erected relied predominantly on the generous donations of the public. Terracotta dressed bricks were selected for the exterior which led to the coining of the phrase ‘red brick university’ by Bruce Truscot. The VGM was originally a central part of the university containing libraries, lecture theatres and common rooms but was renovated in 2008 to be one of Liverpool’s most unique art galleries.

Approaching the Victoria Gallery & Museum it became obvious that the building itself was as artistically valuable as the works it contains. Every wall is beautifully tiled and trimmed with exquisite perfection and the stained-glass windows cast the sun in a kaleidoscope of colours onto the mosaic floor beneath. I wandered around for a while observing the architectural wonder of the place before focusing in on the works themselves.

Whilst I was visiting the Victoria Gallery & Museum, a few exhibitions caught my eye. One was titled ‘Selection of Portraits’ by James Hamilton Hay, part of the new ‘A New Beauty – Romanticism in Art 1880 – 1920’. This particular work consisted of four depictions of women alongside the artists self-portrait. However, the depictions of these women were different to the traditionalist pre-Raphaelite images of nude women reclined on a couch draped with silks. Each woman was posed differently as to highlight their essence, their faces held differing expressions and they were clothed to suit themselves. This expression of reality spoke to me as a result of its honesty. It conjured in me the comparison of filters such as on snapchat or Instagram that ‘beautify’ pictures, however, I believe the real beauty lies in diversity and imperfection.

Another exhibition that interested me was ‘Goggle Head’ by Dame Elizabeth Frink. This work was a sculpture of a masculinised head wearing a pair of opaque goggles. Frink often explored the theme of man as victim or aggressor. The selection of a pair of sinister goggles distorts the identity of the sculpture bringing him to a dehumanised depiction of ‘man.’ He no longer possesses any individuality as his expression and personability is distorted. Frink considered this work and the others within its collection as her first explicit comment on the world’s inhumanity and said later that ‘they became a symbol of evil to me.’

Lastly, within the exhibition ‘Nature vs Humans’ I thoroughly enjoyed the relevance of the sculpture ‘Coronavirus’ by Helen Bimbaum which depicts an almost cartoonist expression of the virus. This sculpture was made in remembrance of those recently lost to coronavirus. Bimbaum explores the ‘strangely beautiful’ world of microbes and the cultural significance of epidemics.

As a first-year student at the University of Liverpool who has been unable to visit to such beautiful buildings and exhibitions within the campus this past year, I would thoroughly recommend a visit to the Victoria Gallery & Museum. Its architecture really is one in a million and the beautiful works within embody a level of artistic variety that is unseen elsewhere. I believe that it is an asset to the university and should be embraced by students and staff alike. Book your ticket to experience it for yourself.