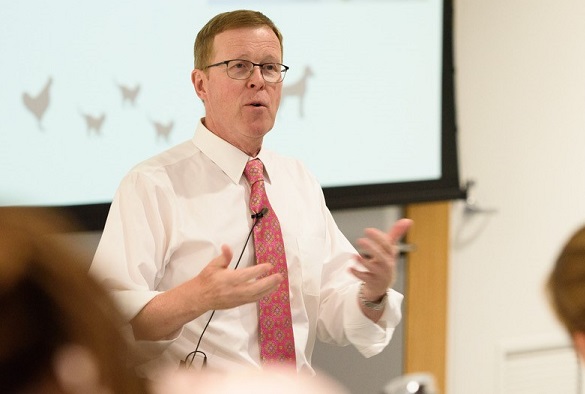 The University has appointed Professor Paul Lunn as its new Dean of Veterinary Science.

Professor Lunn is currently President of the American Association of Veterinary Medical Colleges and will step down from this role when he takes up his appointment at Liverpool.

Professor Lunn will succeed Professor Susan Dawson who is stepping down from her role as Dean after 10 years in the post.

From Student to Dean at Liverpool

For Professor Lunn, this will be a return to the University of Liverpool. Paul graduated from the University in 1982 with a Bachelor of Veterinary Science (Honours) degree before going on to study for a PhD at Cambridge University.

Commenting on his appointment, Professor Louise Kenny, Executive Pro-Vice-Chancellor for the Faculty of Health and Life Sciences, said: “I would like to congratulate Paul on his new appointment as Dean of the School of Veterinary Science. The School is globally recognised as a leader within its field and it’s great news to appoint someone of Paul’s calibre.

“It’s also fantastic to see a former undergraduate of the University return as Dean to the place where his academic achievements began. I look forward to working with Paul to further advance the School’s reputation and development.”

Professor Kenny added: “I would also like pay tribute to Professor Susan Dawson for her work as Dean over the last decade. I would like to thank her for her contributions and expertise which have brought great success and recognition for the School.”

Professor Lunn will begin his role in January 2022.

For more information about the University of Liverpool’s School of Veterinary Science, please visit: https://www.liverpool.ac.uk/veterinary-science/