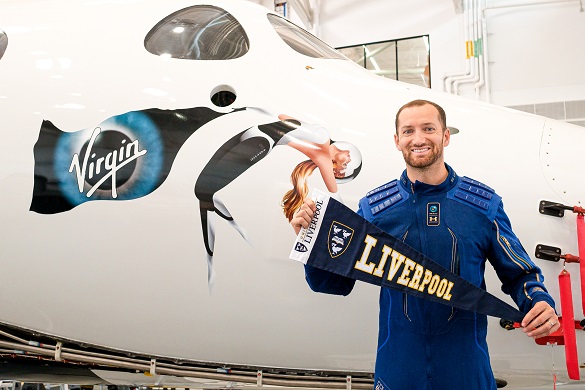 Alumnus Colin Bennett reflects on how his studies at Liverpool led him to take the journey of a lifetime aboard the Virgin Galactic spaceflight.

When the VSS Unity made its historic exit of the Earth’s atmosphere on 11 July 2021, there was a little piece of Liverpool onboard – Lead Flight Operations Engineer and University of Liverpool alumnus, Colin Bennett.

After graduating in 2007 with an MEng in Aerospace Engineering, Colin embarked upon an exciting career, ultimately landing his dream job with Virgin Galactic and the opportunity to join Sir Richard Branson on the first fully crewed spaceflight.

‘The most fun day at work ever’

One of just six astronauts aboard the vessel, Colin says the experience was everything he had hoped for and much, much more. “I wish I could go and do it again tomorrow, and every day!” says Colin.

“The best part for me was the feeling of acceleration when the rocket motor ignited. It was smooth but really exhilarating. Then, once we got into space, the weightlessness and the views of Earth were incredible and breathtaking. There’s nothing that you can do to prepare yourself for seeing that with your own eyes: being able to look down and see all the vivid colours against the blackness of space.”

Aside from being “the most fun day at work ever”, Colin also had an important job to perform during his minutes in space. As Lead Flight Operations Engineer, his role was to evaluate the commercial cabin and the customer experience of the flight. “It was all about learning about the experience and validating what we had tested on the ground,” explains Colin. “We’ll feed that back to the team and make little refinements to ensure our customers have a comfortable time during their life-changing journey to space.” 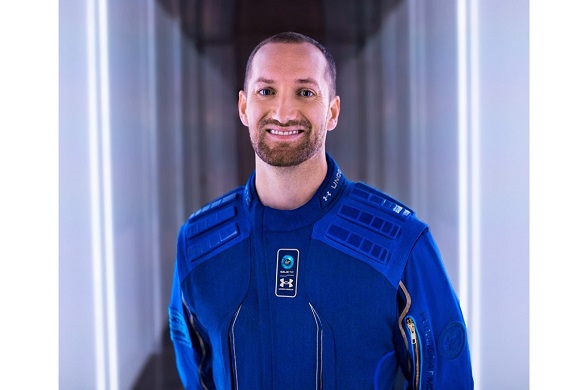 Colin’s four years at the University of Liverpool were, he says, “the starting point for where I am today.” He recalls, in particular, the passion and dedication of the University teaching staff who brought the subject of Aerospace Engineering to life. This included Professor Gareth Padfield who ignited Colin’s interest in flight test and helped him secure his first job after university. “Without Professor Padfield’s guidance, none of what I have achieved in my career would have happened,” says Colin. “I really appreciate everything he did for me.”

The excellence of the University’s engineering facilities also sticks in Colin’s mind, in particular the full-motion flight simulator which he spent a lot of time working in during his degree. “Studying at Liverpool was really a strong foundation for me,” says Colin, “and I enjoyed every minute of it!”

Outside of his studies, Colin was a keen participant in sports at the university, playing football, basketball and working out in the gym. He also appreciated the social side of studying in the city; growing up in the small southwest English seaside town of Clevedon, he was attracted to the excitement and rich cultural heritage of Liverpool. “It was great for me as an 18-year-old to move to the big city and experience a completely different life,” says Colin. “A good university experience is about so much more than just the subjects you study and I really felt that during my time at Liverpool.”

As a child, Colin says he dreamed of being an astronaut – although it always felt like a fantasy, one that would never materialise. “But that’s where we are now: we’re entering a new era where space travel isn’t just for professional astronauts. We’re opening up access to space, and our whole mission is to try and broaden that access so that many other people can experience what I did.”

To current students, or anyone who has a big dream, Colin offers this advice: “There’s no rules or blueprints to what a career should look like – it really can be whatever you make it. Of course, it’s important to work hard. But it’s perhaps more crucial to never doubt yourself, and to be confident but humble. Success is just as much about your character and how you treat other people as it is about intelligence or hard work.”

So, what’s next for Colin Bennett back on Earth? Will he be taking a journey into space again anytime soon? “For now, I’m still replaying the flight over and over in my head,” laughs Colin. “That hasn’t got boring yet! But I’m also very keen to jump right back in and help the team finish up the flight test programme so that we can get the experience rolled out to our customers as soon as possible.

“I’m also keen to get out into the community and talk to younger people who might have dreams of doing something like this. I want to help them make that dream a reality. It’s becoming much more realistic than you might think!”

WATCH: Colin had a special message for students graduating this summer: