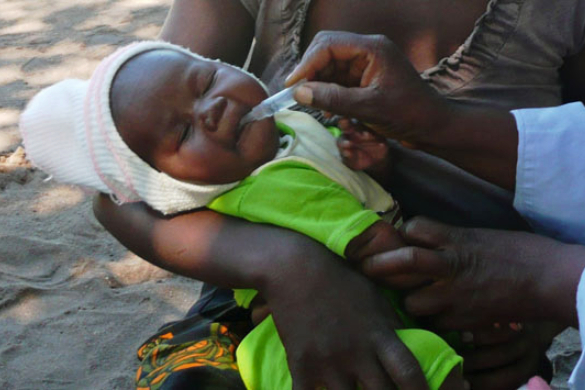 A new study led by the University of Liverpool suggests that vaccinating babies earlier against rotavirus in poorer countries could help improve vaccine effectiveness.

Published in Nature Communications, the research provides new perspectives on why oral rotavirus vaccines underperform in the countries where they are needed most.

Rotavirus is a highly infectious stomach bug and a leading cause of severe diarrhoea in infants and young children throughout the world. Since their introduction in 2006, rotavirus vaccines have halved the numbers of deaths due to rotavirus globally, but they are less effective in Low- and Middle-Income Countries (LMICs) where rotavirus is still responsible for 250 million episodes of diarrhoea and 128,500 deaths each year.

In countries such as Malawi and India the vaccine is around half as effective as it is in the UK. The reasons for these geographical differences are not well understood but are likely to be complex and involve multiple factors. As part of the Rotavirus Vaccine Immunogenicity study (RoVi study), researchers set out to systematically investigate several factors that are suspected to contribute to this vaccine underperformance including maternal immunity, gut microbe diversity, and the prevalence of other infections.

The researchers recruited 664 pregnant women across three sites in Liverpool (UK), Blantyre (Malawi) and Vellore (India) and sampled mother-infant pairs throughout the first three months of the infants’ lives, covering the period in which they receive their routine vaccinations. All infants in the three countries received the same two dose oral rotavirus vaccine, which is licensed globally.

As expected, more UK babies developed immunity to Rotavirus than those in Malawi and India. The team analysed and compared blood, stool and breast milk samples across the three countries to look for patterns that might explain this geographic difference.

While none of the factors they investigated were shown to be clear contributors to poor vaccine performance, they made several observations that could open up new avenues for future research.

Professor Nigel Cunliffe said: “Our findings suggests that earlier vaccination, in the neonatal period, could improve oral rotavirus vaccine effectiveness in low-income countries. These data advocate for the need to further investigate neonatal immunisation, whether with a neonatal strain or a vaccine attenuated strain, as a pragmatic approach to achieving greater impact through modification of current rotavirus vaccination programs.”

Infants from Malawi and India were also found to have a greater diversity of gut microbes at a young age than UK infants, which was associated with a poorer immune response to the rotavirus vaccine. Dr Christina Bronowski explained: “These findings are contrary to established descriptions of what constitutes a ‘healthy’ microbiota, often assumed to be of high diversity and largely based on adults in high-income countries. Our work highlights a more complex picture than previously thought.“

The study also highlights the complexity of using rotavirus vaccine antibody levels alone as a measure of protection. The researchers suggest that other measures, such as vaccine virus stool shedding, should be used in addition to better capture the disparate oral vaccine response in different populations.

Professor Miren Iturriza-Gomara added: “Overall, our study supports the potential for a range of interventions to increase the impact of rotavirus vaccine, and demonstrates that any single parameter such as microbiome or maternal immunity can have markedly  different influences depending on geographic setting, age, and specific health outcome under study. Our findings can help to further investigate and find solutions for the underperformance of rotavirus and other oral vaccines  in low-income countries.”

Read more about the research in a ‘Behind the paper’ blog written by Dr Christina Bronowski.

The UK and Malawi sites were funded by the UK Medical Research Council and the UK Department for International Development (Newton Fund MR/N006259/1). The site in India was funded by the Government of India’s Department of Biotechnology.