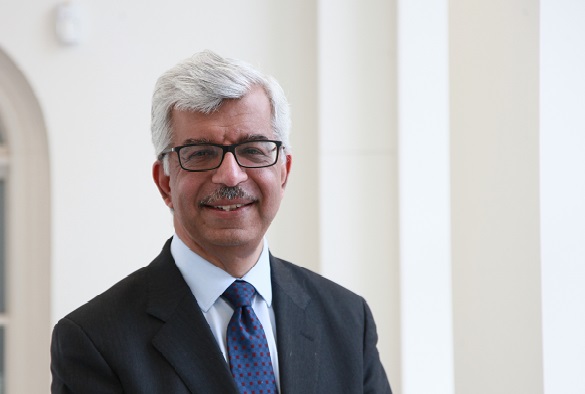 Testing patients for genetic variations that affect how their body will respond to common medicines must be integrated fully, fairly and swiftly into the NHS, according to a report produced by a working party chaired by a University of Liverpool academic, Professor Sir Munir Pirmohamed.

The report, ‘Personalised prescribing: using pharmacogenomics to improve patient outcomes’ published today by the British Pharmacological Society and the Royal College of Physicians, explains how a type of testing, known as pharmacogenomic testing, should be deployed across the NHS to ensure all patients have an equal chance of being prescribed a medicine at a dose that is likely to be safe and effective for them, with minimal side effects.

There can be enormous variation from person to person in whether a medicine works, whether it causes serious side effects and what dose is needed. Scientists have established a genetic cause for such variation for over 40 medicines.

One example is an antibiotic called gentamicin that is used intravenously to treat serious infections. Around one person in every 500 carries a particular gene variant that predisposes them to hearing loss with this type of medicine. Another example is codeine, a very widely used painkiller. About eight per cent of the UK population lack the gene which allows this medicine to work properly, meaning they will not get any pain relief.

A commentary on the report, that will be published in the British Journal of Clinical Pharmacology, explains that almost 99% of people carry at least one of these genetic variations.

Professor Sir Munir Pirmohamed, David Weatherall Chair of Medicine at the University of Liverpool, and Chair of the report’s working party, said: “A small number of pharmacogenomic tests are available in the NHS, but this needs to be expanded. The UK is a world leader in genomic medicine, and the implementation of a wider range of pharmacogenomic tests would further demonstrate UK leadership.

“Today we are calling on government and the health service to ensure that patients across the UK are offered these tests where there is evidence to show their utility. For patients, this will mean the medicines they take are more likely to work and be safer. In the 21st century, we need to move away from the paradigm of ‘one drug and one dose fits all’ to a more personalised approach where patients are given the right drug at the right dose to improve the effectiveness and safety of medicines.”

The report gives a series of recommendations to help deploy pharmacogenomic testing in GP surgeries, hospitals and clinics across the UK. These include: central funding through the relevant commissioning processes in all four nations to avoid a postcode lottery that could exacerbate inequalities; education and training; and a pharmacogenomics advisory service for doctors.

It also recommends that the pharmacogenomic testing service should be evaluated through audit, research and patient input, and that further research is funded to identify more interactions between genes and drugs, refine existing tests and assess uptake.

Crucially, patients and the public should be involved in the design and creation of the service. The report’s co-author Dr Emma Magavern, a clinician at Queen Mary University of London, said: “Patients must be at heart of this. We need to create understanding of pharmacogenomic testing, how it works, and the health benefits it offers. The public need to feel confident that their genetic data will remain secure and confidential, and we need patient and public input to make sure our pharmacogenomic testing service is fit for purpose and meets their needs.”

Professor Sir Mark Caulfield, Vice Principal for Health at Queen Mary University of London and President Elect of the British Pharmacological Society, who contributed to the report, said: “The UK is at the forefront of adoption of genomics in healthcare. This means we can be the first in the world to integrate pharmacogenomic testing into the NHS. This report provides the blueprint and identifies the resources and actions needed to ensure pharmacogenomics becomes usual care in the NHS over the next three years.”

In his foreword to the report, Chair of NHS England Lord David Prior said: “In simple terms, our understanding of human biology has been transformed by the sequencing of the human genome and our new-found knowledge of genetic variation. We have always known that we were different, now we know why. And we can use that knowledge to predict illness, diagnose illness and to treat illness on an individual, personalised basis. This will revolutionise medicine and, combined with a digitally driven population health approach, fundamentally change the traditional model of care. …[pharmacogenomics] is the future, it can now help us to deliver a new, modern personalised healthcare system fit for 2022.”

Dr Andrew Goddard, president of the Royal College of Physicians, said: “Pharmacogenomics has long been an area of limited and difficult access for health professionals – not just in its daily use, but also in the relevant training available on this subject. It is an area that has traditionally been absent from the online systems and tools used daily by doctors. Our hope is that this report will be the springboard to getting genomics working effectively in everyday clinical practice.”

Ravi Sharma, Director for England at the Royal Pharmaceutical Society, who was on the working group for the report, said: “Pharmacy teams across the whole system have a vital role to play in pharmacogenomics, particularly in primary care where most prescribing and dispensing takes place for patients. We want to see infrastructure established to create a pharmacogenomics service in every Integrated Care System, as recommended in the report, with pharmacists having a critical leadership role in the multidisciplinary team embedded into clinical pathways across specialties to improve care for individual patients.”