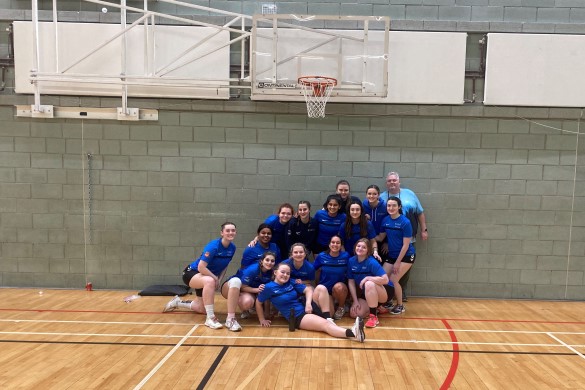 Author Daniella Trimmis is a current student and Vice-President of the AU’s Handball Club.

Handball is one of the fastest growing sports in the UK and we as a team have continuously worked incredibly hard to elevate the sport at university level and this year everything has finally come to fruition.

As a team, our women have been incredibly successful throughout the years and it is a result of all of our success that we will be heading to Poland this July to compete at the European University Games in Lodz. This is perhaps a once in a lifetime achievement and an experience that none of our players have ever had so receiving the news initially was both such a huge shock but we were all understandably incredibly overwhelmed.

Winning these games would mean the absolute world to us and we’d be seen as gold medal winners of the European University Games but to even just be asked to compete and attend is an honour in itself.

For those unfamiliar with the European University Sports Association, we were told their European University Games are the equivalent of a smaller Olympic Games with both an opening and closing ceremony and private athlete villages (university accommodation but it still counts!). Handball is perhaps one of – if not- Europe’s most popular and fastest rising sports behind football so we expect it to be the most sought-after sport within the Games for spectators to watch. With that in mind we knew that preparation for the trip would be arduous but that didn’t stop us at all from getting underway. We have been so lucky to have the full support from the Athletic Union who have helped provide us with extra training, strength and conditioning, sports psychologists and this all of this has prepared us for intense competition against our toughest competition yet.

Realistically, we are a small team based at the University of Liverpool and have only recently just joined BUCs and most of our players have only been playing this sport for under 2-3 years as opposed to our opponents who have been playing since grassroots levels. Nevertheless, to be the first AU team to ever be invited to compete at such a high level against some of Europe’s best and brightest up and coming – not only handball players – but athletes is a blessing and is a testament to how good we are.

We have been really thankful to have so much support from people in terms of funding too. We would like to thank the FRIENDS group for providing us with a grant and have donated over a grand from a donation page on GoFundMe and bake sales. John Aldridge kindly provided us with a signed football shirt to also raffle off too.

While we would love to have everyone come and support us, we understand that’s a tall task but we will be featuring everything regarding the trip on all social media platforms for people to keep up to date with not only our games and progress in the competition but our temporary lives as elite athletes!

As Vice-President I just want to reiterate how proud I am of this team and what has already been achieved. We have dealt with so much adversity as a team yet met so much success and know personally just how much this club in general has done for not only myself but other members. We would love to showcase this to the rest of the University and hopefully all of Europe in Poland once we touch down on the 23rd of July.