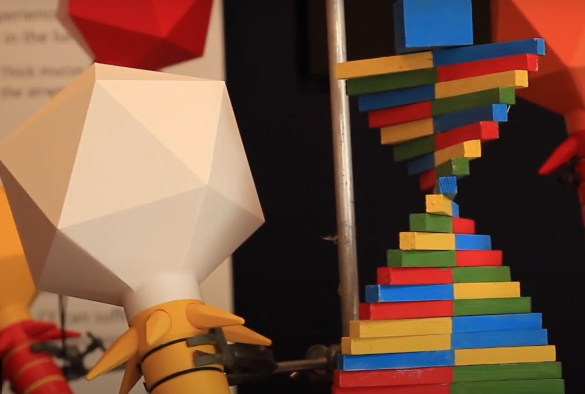 University of Liverpool scientists took their research to The Royal Society Summer Science Exhibition last week. Each year, the Royal Society throw open their doors to over 10,000 visitors to speak with the country’s top scientists about the latest big topics in research. Just a handful of outstanding research groups and science communicators are selected to showcase their work in new and exciting ways.

The project was a collaboration between researchers at the University of Salford and the University of Liverpool. Together, their BBSRC-funded work investigates bacteriophages (phages), which are viruses that infect bacteria. The team are using a range of molecular approaches to find out how these viruses act as puppet masters to control the way that bacteria behave in lung infections.

It’s wonderful to engage with such a diverse range of people at the @royalsociety #summerscienceexhibition from 3- 86yo, watching them be fascinated by our phage research and even leaving with phage tattoos! Come and see us at the #microbialpuppetmasters exhibit to get involved! pic.twitter.com/6NIhKqxhMs

Dr Chloe James, who led the University of Salford team, said: “We were honoured to be part of such a prestigious event and to have the opportunity to throw light on such an awesome area of research that is really taking off right now. Bacteriophages have been in a perpetual evolutionary dance with their bacterial hosts for millions of years. Some are being developed as antibacterial therapies, but others can form cooperative partnerships with the bacteria they infect. Our research is pulling back the curtains on a set of phages that make bacteria more able to survive in the body and cause disease.”

The team worked with immersive artists, Paul Miller and Richard England, to create ‘VR-AIRWAYS’ an immersive journey through a diseased lung, magnifying the microbial communities that inhabit the airways of people with cystic fibrosis. They also partnered up with the University of Salford’s Morson Maker Space, a unique digital fabrication lab, to create giant interactive models

Dr Heather Allison, who led the University of Liverpool team, commented: “I was extremely excited to talk about phages, our hands on demonstrations and our virtual reality experience let visitors really understand that bacteria get viral infections, too – and sometimes these infections results in obtaining superpowers.”

Dr Jo Fothergill, University of Liverpool added: “It was a privilege to be part of this exhibit and communicate about the different roles of phages from contributing superpowers to the bacteria to a potential therapy to combat antimicrobial resistance. It’s such a fascinating area and there’s still so much we don’t understand. The virtual reality journey into the lung was fantastic, an opportunity to see our research come to life before our eyes!”

A team of 21 researchers from both Salford and Liverpool attended the Summer Science event to talk about the different ways that they ae working with bacteriophages, The diverse team included Undergraduates, PhD students, Postdoctoral researchers, and Lecturers.

Dr James added: “I love working with others at the boundaries of science and art. It really makes you think about how your research is perceived by others and why it is important. We were excited to see peoples’ reactions when they saw up close what happens when phages infect bacteria. A better understanding of these interactions could lead to new ideas about how we manage bacterial infections. This is crucial in the face of the growing global crisis of antimicrobial resistance.”

More information about the Microbial Puppet Masters exhibit and research can be found on their website.