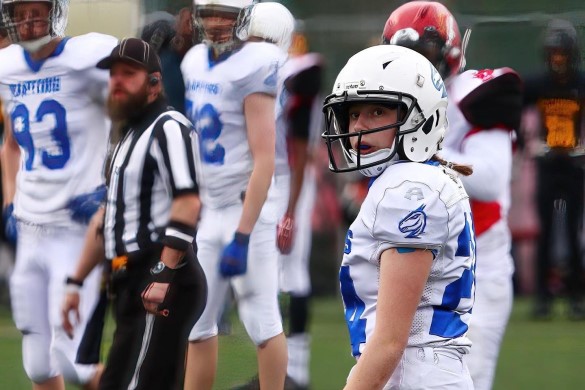 I started playing American Football when I joined the Raptors in October 2021. Before I joined, the team had not had a woman commit to playing for more than three weeks – and yet somehow, here I am a year later – a regular player, on the committee as Game Day Manager and extremely excited for the season ahead. Last season, I played in all 11 games, including Varsity, and also won the Northern Conference Cup Championship with the Raptors.

Originally, I wasn’t sure what sport to play at university; however, my parents had watched the NFL for years, and I had watched the two most recent Super Bowls with them, so I was intrigued by it – especially after noticing on the Sport Liverpool website that the team was ‘mixed’.

Recently I found out I was actually the first person to sign up for the Raptors on that day at the Welcome Fair, and it has turned out to be one of my best decisions ever. I have to be honest and say that I felt quite intimidated at my first session because not only was everyone bigger than me, I was the only girl, and began to wonder if ‘mixed’ was a typo – but all of that quickly changed. Nobody questioned the fact that I was a girl and I was treated the same as everyone else. The whole team was really welcoming and supportive, and I would encourage any girl to give it a try.

The team works hard on and off the field, and it’s safe to say this rubbed off on me – as two months after I started, I was invited to a Great Britain Women’s trial camp (which I honestly thought was just an invitation to train with them for a day). As a result of this camp, I was called up to the GB Women’s Training Squad as a developmental player, which led me to be accepted into the Performance Athlete Programme at University of Liverpool for this year.

I’m so grateful for every opportunity that has come my way since picking up this sport, and I couldn’t believe my luck when I was invited to play an exhibition Flag Football Game with the Great Britain Flag Team…which also happened to be during the half time of an actual NFL game between Green Bay Packers and New York Giants at the Tottenham Hotspur Stadium.

As cliché as it sounds, it honestly was a dream come true to run out on an NFL field in front of 60,000 spectators – I would never have imagined this when I wrote my name down at the Welcome Fair last year.

Without the Raptors, I wouldn’t be where I am today. Their level of support is unmatched, and I couldn’t ask for better coaches, better teammates, or a better family. They look after me, and I am so grateful for them.