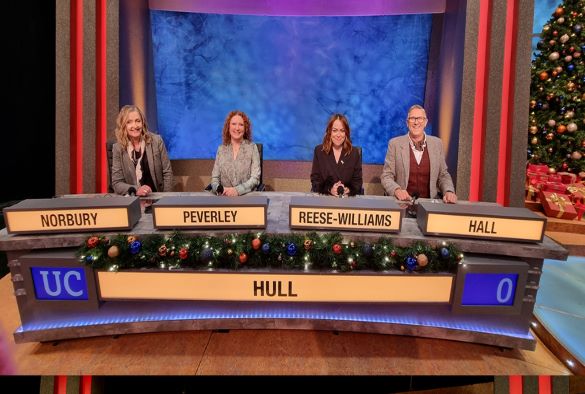 Professor Sarah Peverley, a medievalist in the Department of English, was part of the University of Hull team who competed in the Christmas University Challenge Final on Friday 30 December.

Hull finished runners up to Balliol College, Oxford, in an exciting final broadcast on BBC Two.

Sarah, a BBC New Generation Thinker and Fellow of the Royal Historical Society, teaches Medieval and Renaissance Literature at the University of Liverpool. Her research focuses on literature produced during The Wars of the Roses, on medieval manuscripts and early books, and on mermaids in literature and art.

She graduated from Hull with a BA Hons in English literature in 1998 stayed on to complete her PhD in medieval literature in 2004.

Sarah stepped in to compete in the final for Hull when Award-winning playwright and dramatist, James Graham, was unable to take part.

After the final, Sarah said: “Massive congratulations to Team Balliol on a secure victory! It was great fun and I didn’t want it to end. Thanks also to Team Hull for being fab companions!”

Chaired by Jeremy Paxman for the final time, this year’s Christmas University Challenge featured 56 alumni from 14 universities competing for the coveted champions title.

You can watch the University Challenge Christmas final again on BBC iPlayer here.