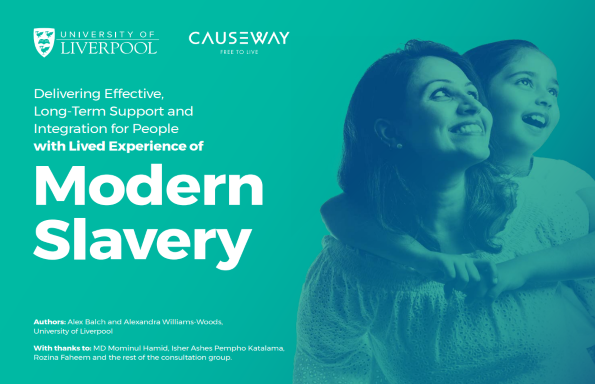 Research from the University of Liverpool, which proves that long term emotional support for survivors of modern slavery is vital, is being used to urge policy makers to provide more support, pointing to the success of an initiative from the charity Causeway.

With the numbers of people affected by modern slavery (such as forced labour and trafficking) increasing, the research highlights how long-term support is vital for survivors to recover from their exploitation.

Professor Alex Balch from the Department of Politics and Alexandra Williams-Woods, from the Management School, have published an independent analysis of Causeway’s LifeLine programme. This service provides long-term emotional support to survivors of modern slavery through initiatives such as drop-in sessions, phone calls and signposting.

As well as interviewing those with lived experience of modern slavery, the analysis was co-designed with a group of survivors to find out how the service was working on the ground to develop recommendations to fully benefit service-users.

Government-provided support for survivors of modern slavery through the National Referral Mechanism (NRM), was established to be short-term and designed to help foreign nationals, encouraging them to cooperate with police and return to their home countries. However nearly half of modern slavery survivors now identified are British nationals – many of whom are children that are criminally exploited.

When the NRM support ends, after 45 days or when a decision is made on whether an individual has been identified as a survivor of modern slavery, LifeLine (established in 2012) steps in to provide services including helping survivors find employment and housing as well as linking them in to other agencies for tailored support on issues such as immigration and mental health.

The University of Liverpool’s innovative analysis of the LifeLine service found that 78% of survivors were happy with the support that the service provided.

During the study, survivors expressed concern about how much support was reduced when they moved from the NRM to Lifeline, indicating that government-provided support should be expanded.

The recommendations from the University of Liverpool report give targeted advice to Causeway about how effective support for survivors can prevent harm, foster empowerment by being proactive, and be anchored in the local community through signposting to other services.

Professor Alex Balch, who led the research said: “Our study has found that Causeway’s LifeLine is an essential service which prevents survivors of modern slavery from falling through the cracks once government support through the NRM has ended. This support is crucial given that there are increasing numbers of people who have been identified as having experienced modern slavery.

“Although the government has claimed that its law on modern slavery is ‘world-leading,’ our research found that without additional support offered by LifeLine, many survivors would struggle to navigate the system.

“While our report made specific recommendations for Causeway, our findings highlight the need for government-provides support to be more robust to prevent survivors falling off a ‘cliff edge’ when the NRM support ends.

“We were pleased that our assessment of LifeLine could involve survivors directly in the production of the research, allowing those who are directly affected by current services to be an integral part of the discussion.

“We do hope that our recommendations will be taken forward to further improve the support that Causeway and, indeed, other organisations, can offer to survivors.”

Phill Clayton, Head of Research Development at Causeway said: “I remember clearly when I was managing a safe house for male victims of slavery in 2011, working alongside five survivors of labour exploitation. After the government’s 45 days of support came to an end we had to abruptly move them on before they had fully recovered. This was heart breaking. The same day they moved out we received five more survivors filling up the safe house. But the next day the men who had moved on came back, knocking on the door and window desperate for our help.

It was this situation that seeded the idea of ongoing support via a drop-in model, allowing us to support more survivors with the limited resources we had. The philosophy was light touch, early intervention to nip in the bud issues before they escalated. The model has grown organically through co-design with survivors, we called it the Integration Support Programme (ISP).”

You can view the report and its recommendations in full here.