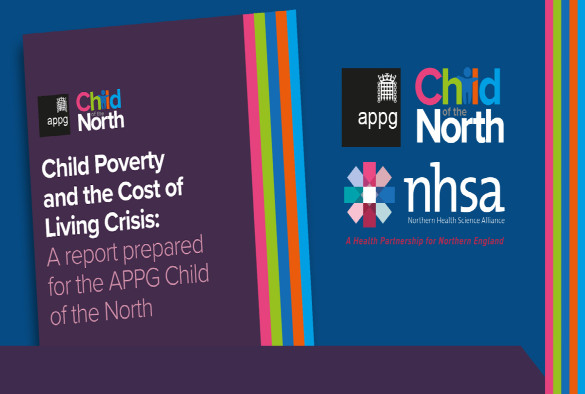 A new report involving University of Liverpool researchers has warned that children living in the North of England are among the most vulnerable to rising living costs.

The Child Poverty and the Cost of Living Crisis report from the All-Party Parliamentary Group Child of the North, has found that children in the North are some of the least protected from the current cost of living crisis.

New analysis released today [January 24, 2023] shows that child poverty, including fuel poverty and food insecurity, is higher in the North than the rest of England. For many families the current economic chaos will deepen an enduring child poverty crisis in the region.

The report authors have issued a stark warning to government that rising living costs will lead to immediate and lifelong harms for children: worsening physical and mental health outcomes; undermining children’s learning, social wellbeing and education; and risking lower lifelong health and productivity.

Emma Lewell-Buck, MP and Co-Chair APPG Child of the North, said: “Whilst poverty is, sadly, not a new experience for many children in the North, the scale and severity of deprivation is now unprecedented. As the cost of living crisis worsens, vulnerable children and families, especially in the North, are being pushed to the edge. This report outlines the injustice of deprivation in our country and presents policy measures that, if implemented, could ensure that children in our region are never left hungry, cold or without.”

Mary Robinson, MP Co-Chair APPG Child of the North, said: “The findings of the report serve as a stark reminder of the devastating reality of child poverty in the North. It is heartbreaking to hear stories of those living this reality and the uncertainty of what the future holds. What is clear is the need for immediate action to tackle the crisis before long-term harm is caused to the children of the North.”

David Taylor Robinson, Professor of Public Health and Policy at the University of Liverpool, and co-author of the report, said: “Poverty is the key driver of inequalities between children in the North and the rest of the country, which we know leads to worse physical and mental health, poorer educational attainment and life chances. All children, no matter where they are born, should be entitled to the same life chances. However, we know this sadly isn’t the case. The pandemic contributed to widening inequalities and now the rising cost of living will place further strain on families with children.

“Parents across the North are having to go without meals to feed their children, and the situation will only get worse unless policies are put in place to ensure families have enough support to keep their children fed and warm.”

Hannah Davies, Health Inequalities lead for the Northern Health Science Alliance and report co-author, said: “It comes as no surprise that areas across the North of England are regarded as being the most vulnerable to the cost of living crisis. The combination of increasing inflation, more people living in poverty, in lower paid jobs or unable to work, in receipt of social security support, and already facing high levels of financial stress and debt, makes it extremely difficult for families to absorb new shocks on costs. We urge the government to prioritise the health and wellbeing of children and to consider the clear recommendations put forward in this report.”

Sophie Balmer, End Child Poverty Youth Ambassador, said: “Having grown up living in a family on a low income, I want to use my voice to explain the reality of what it’s like for hundreds of thousands of children across the North. Even now I am at university and relatively financially secure, the worry doesn’t leave. I remember the unbearable anxiety and how it all impacted on my life. The greatest impact was on my education. It isn’t just missing a meal or feeling hungry during the day, it’s the worry of how your sister’s school trip will be paid for, or how you haven’t seen your mam eat a proper meal in days – all going through your head in a chemistry lesson. It creates anxiety. And when combined with the stress of school, this explains the impact on educational attainment for children living in poverty. The pressure for change is much more intense at the minute. The government needs to help families. It doesn’t feel like an ask anymore. It’s an absolute need.”

Further key findings from the report include:

The report was prepared by experts from northern organisations and universities for the APPG Child of the North. The APPG brings together policy makers and experts in child outcomes from across the country to find solutions to the disparities suffered by children in the North of England. The group was launched following the publication of The Child of the North report, produced by the Northern Health Science Alliance (NHSA) and N8 Research Partnership.

A suite of recommendations to government have been laid out by the report authors to ensure families with children have enough money and security of income to meet basic needs, such as healthy food to eat and warm homes.