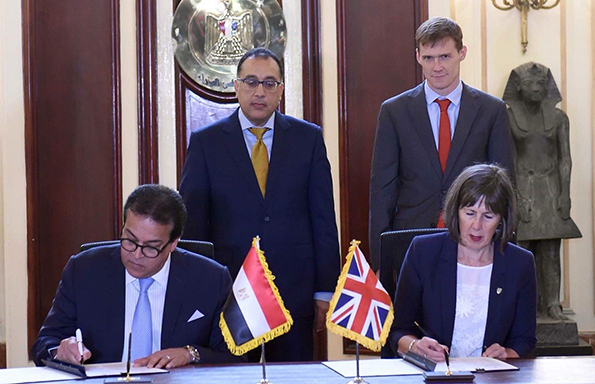 The University of Liverpool signed a Memorandum of Understanding (MoU) with representatives of the Egyptian government during a high level visit to the North African country.

The MoU, signed by University Vice-Chancellor, Professor Dame Janet Beer, and HE Dr Khaled Abdel-Ghaffar, of the Egyptian Ministry of Higher Education and Scientific Research (MoHESR), outlines a range of options for collaboration including joint research activities, academic staff and student mobility and the potential to develop an International Branch Campus (IBC) in Egypt in the future.

Professor Beer, who is also President of trip organisers Universities UK (UUK), said: “The University of Liverpool has an established reputation for its capabilities in developing international higher education partnerships.

“Strengthening our global reach in education and research is at the heart of our vision for the University’s future.

“The UK and Egypt have a strong bilateral relationship supporting the development of mutually beneficial partnerships in education, research and innovation and we are delighted that our governments have put such an emphasis on higher education co-operation.

“We are grateful for the support of the British Ambassador in Egypt and the British Council. The visit provides an opportunity for us to better understand the models of collaboration that will have the greatest impact.”

The University was the first to establish the study of Egyptian archaeology with the appointment of John Garstang in 1902. It remains the largest centre for Egyptology research in the UK and now focuses on the preservation and access to important cultural heritage assets.

The UK delegation was welcomed by Egyptian Prime Minister, HE Engineer Moustafa Madbouly.

It follows a successful visit by HE Dr Khaled Abdel-Ghaffar to the UK in January 2018 during which a bilateral governmental MoU was signed. This set out expectations of the conditions under which UK universities would be able to establish IBCs in Egypt.

Vivienne Stern said: “UK and Egyptian universities have been working together for many years.

“It’s extremely important that we expand access to the highest quality of education to Egypt’s large youth population.

“It is exciting to mark the growth of UK-Egyptian university engagement across a variety of areas, particularly in the last five years: the delivery of UK degrees in Egypt; Egyptian scholars welcomed to the UK; and research collaboration.

During a series of meetings, the delegation discussed topics including:

Egypt is currently the fifth largest host country worldwide of UK transnational education – with over 19,800 students enrolled on UK programmes. The number of UK-Egypt co-authored research papers is also increasing, bolstered by bilateral initiatives such as the Newton-Mosharafa Fund, and the UK is currently Egypt’s fourth largest international research collaboration partner (source: SciVal).