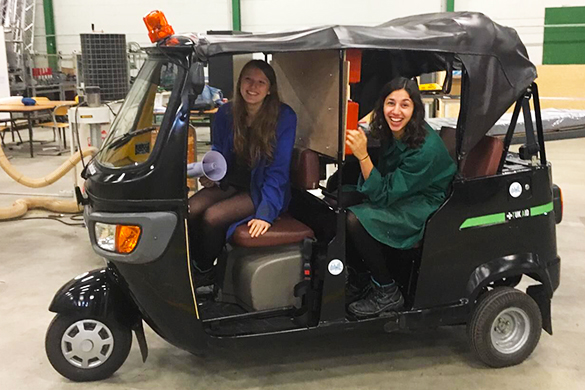 Hi, we’re Beth and Kiaya and we’re in our fourth year of our Mechanical Engineering degree here at the University.

We’re working on a project with Médecins sans Frontiers (Doctors Without Borders) and Industrial Design students from The Hague University of Applied Sciences to develop a way to save the lives of people living in Less Economically Developed Countries.

To do this, we’re trying to address the lack of emergency aid by designing and developing a simple, inexpensive and accessible way to provide medical humanitarian aid in areas where more traditional methods aren’t that effective. 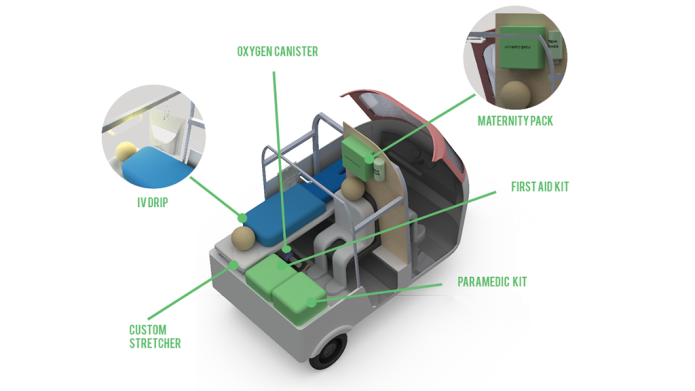 We’re investigating the possibility of converting tuk-tuks into ambulances for use as rapid response vehicles in a variety of situations and applications. Tuk-tuks are motorised, three wheeled vehicles that are a common form of urban transport in many countries around the world.  Their small size and increased manoeuvrability makes them a great base for this design.

One of the main applications is in areas hit by both natural and manmade disasters. These affect over 550 million people worldwide and leave a huge percentage at risk and in need of emergency aid. These disasters often have the largest impact in less economically developed areas, where recovery can take years or even decades due to a lack of infrastructure, resources and funding.  A lack of ambulances makes evacuating critical casualties a time-consuming and often dangerous process.

The aim of this project is to research, design, prototype and develop the conversion of a tuk-tuk into an ambulance for use in less economically developed areas with limited access to full scale ambulances.  The system could be used in emergency situations to evacuate casualties from a building collapse, weave around traffic and rubble, or to ferry a pregnant woman from a rural area to hospital.

This issue is known only too well to Médecins sans Frontières, one of the world’s furthest reaching and most influential NGOs. They’re the client for this project; offering guidance and advice about the issue we are tackling and the capabilities and facilities to make it happen.

We started the project in September 2017, joining a group that had already begun the initial design phase. Our role was to do an initial assessment of the concept and provide engineering solutions to the challenges it faced. We split the project into two major parts; the ambulance and the stretcher.

There was a lot of time spent finalising the designs, choosing materials, writing build and test plans and in the workshop making prototypes (huge shout out to Tony, the technician, who was so unbelievably patient with us as we fumbled around the workshop during the build phase).

We’d often get calls from The Hague relaying recommendations from medics, asking us to lengthen one section or have more space in another, and we’d have to take another look at the design and repeat the process again.

In this video you can see us testing the scale prototype of our first stretcher in a 1:1 TukTuk shell. The stretcher and loading system held their own, as well as allowing for comfortable seating for a paramedic! ——————————————————————✅TukAid is now LIVE on Indiegogo!✅ ➡️Link in bio!⬅️ —————————————————————— #indiegogo #indiegogocampaign #crowdfunding #humanitarian #humanitariandesign #tukaid #tuktuk #keke #autorickshaw #firstaid #ambulance #healthcare #design #innovation #startup #entrepeneur

It could get pretty tiring and stressful at times, but we kept motivated knowing that we were working towards something that could make a really positive impact if we managed it.

The Dutch side of the team have spent a long, long time trying to find us a tuk-tuk to convert into the first full prototype, and finally they’ve managed it!

We’ve been awarded a grant by The Hague Municipalities’ Central Innovation District that means the materials can be purchased and Prototype 2.0 can be produced to the build plan we’ve written.

It can be pretty tough communicating when the other half of the team is so far away (we’ve missed skype meetings a few times because we’re working in different time zones), so we’re really grateful that we’ve been given opportunities to head over and talk things through in person in The Hague. These face-to-face meetings really do pull the project forwards.

We’ve just come back from The Hague where we got to meet the newest prototype.  It was great to see the results. Seeing the tuk-tuk for the first time wasn’t a surprise because during the build process we’re basically on call 24/7. But it was fantastic to see the design we’ve worked on go from paper sketches to CAD renders and finally become a real-life, fully operational product!

Producing a final prototype is one of the last steps on the long road to implementation. Next up is extensive testing to ensure the system performs as expected in terms of stability and steering, before completing operational field testing.

We’re really proud that we can be a part of this project and are super excited for its future. We really do believe that doing a good job designing an appropriate, accessible and durable solution could help save many lives in the long run.