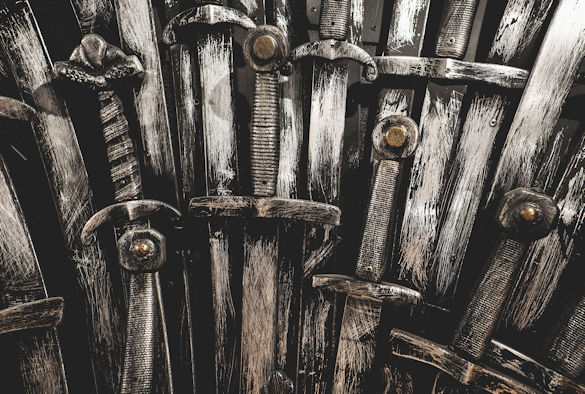 WARNING CONTAINS SPOILERS FOR THE TV SERIES ‘GAME OF THRONES’ AND THE WARS OF THE ROSES….

Professor Sarah Peverley is a medievalist, book historian, broadcaster, and BBC Radio 3 New Generation Thinker. She teaches Medieval and Renaissance Literature and contributes to the MA in Medieval Studies run by History. Her research focuses on literature produced during The Wars of the Roses, on medieval manuscripts and early books, and on mermaids in literature and art.

“I’ve been following the TV show ‘Game of Thrones’ with some interest as I am a medieval scholar and I’ve always loved the books it is based on. Although the series draws on a broad range of influences from across history, one of the most enduring and influential has been the medieval period.

Among the rich catalogue of historical figures and events that seed the on-screen action, one of the most enduring influences has been the fifteenth-century civil conflict known as The Wars of the Roses, which gave rise to the Tudor dynasty. This manifests itself in different ways, such as the annihilation of most of the noble houses and the inheritance of what is left by unexpected heirs. For example, against all the odds Sansa is now in charge of House Stark in the North and Gendry has inherited House Baratheon despite him being an illegitimate son.

Even as we approach the final episode, just as in The Wars of the Roses, there is more than one contender for the Iron Throne. If the series goes the way that history did, this issue could be resolved by the marriage of individuals from two opposing houses.

However, medieval culture had a very strict set of rules to define what made a good ruler. They had to be tactically adept on the battlefield, knowing when to fight and when to retreat. They needed to show mercy when required and place the wellbeing of their people above everything else. Most importantly, a good ruler had to take counsel from wise advisors.

So how do the two main contenders, Jon and Daenerys, measure up to these standards?

Jon has a better claim to the throne than Daenerys. He has shown both bravery and mercy on the battlefield. However, his loyalty and honour often get in the way of him taking on-board the good advice he has received from people.

Daenerys, on the other hand, has lost, ignored or burnt the wise counsellors she had and has now descended into tyranny, annihilating the innocent people she was supposed to protect. Historically, things do not end well for tyrants.

If neither Jon nor Daenerys have the right qualities to rule, who might we see on the Iron Throne as the series draws to a close?

Amongst all the characters that we have followed throughout the series Tyrion and Sansa stand out as the two who are best equipped to rule. Both have gained an excellent understanding of the human condition and the horrors of war. They are able to think tactically, they are fierce about protecting those in their care, and they are both adept at giving and taking advice. All of these qualities arguably make them superior choices for ruler by medieval standards.

Who knows, there might not be an Iron Throne to rule from in the end. Perhaps the survivors will leave the smouldering ashes of Westeros and take a much needed holiday in Essos!”

For information about Sarah and her research please visit http://sarahpeverley.com