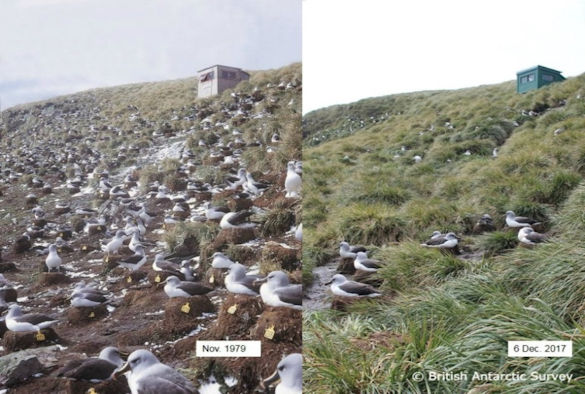 A colony of grey-headed albatrosses on Bird Island, South Georgia, taken from the same position almost 40 years apart (in 1979 and in 2017).

A new study by a University of Liverpool seabird ecologist highlights, that sub-Antarctic seabirds are most at risk from unsustainable fishing during the southern hemisphere winter and in the south Atlantic and Southwest Indian Oceans.

The link between fishing and the steep decline in seabird populations is well established, but the identification of problem ‘hotspots’ will better help agencies to conserve a number of threatened species. The study is published in the Journal of Applied Ecology this week (22 May).

Scavenging birds like albatrosses and petrels are attracted to fishing vessels because the baited lines and offal discharge are an easy meal. All too often, they are caught on baited fishing hooks or are injured in collisions with cables that haul or monitor the trawl nets, and break their wings.

Albatrosses can live for over sixty years and spend the majority of their lives at sea, making monitoring very difficult. Advances in tracking technology have made it possible for researchers to gather detailed data about their foraging behaviours at different life stages. This enables scientists to predict where they are most likely to be victims of bycatch.

Over the last two decades, researchers have used miniature electronic tags to record bird movements. The tags are placed either on the back feathers (weighing less than 50g) or are attached to rings on the legs of birds (less than 5g).

Lead author Dr Tommy Clay, a seabird ecologist at University of Liverpool, said: “By mapping bycatch hotspots, we learnt that birds are at highest risk during the southern hemisphere winter, and in the south Atlantic and southwest Indian Oceans. We also identified that the pelagic longline fishing fleets of Japan and Taiwan, which target high-value tuna such as bluefin, represent by far the highest potential bycatch risk. Improved monitoring of these and other fleets is crucial for albatross numbers to recover.”

Scientists hope this research will allow for greater regulation and accountability of fishing fleets. There are already a variety of effective bycatch mitigation measures available. Fleets can set their baited fishing lines at night when birds aren’t feeding, meaning they won’t be attracted to floating bait and at risk of swallowing the hooks. Running lines with flapping streamers parallel to longlines during setting or to trawl cables can act like a scarecrow, discouraging albatrosses and petrels from the areas of greatest risk.

“A suite of bycatch-reduction measures are available that can be extremely effective when used properly, for example in the toothfish fishery around South Georgia. However, South Georgia seabird populations continue to decline at alarming rates which indicates the failure of many fisheries elsewhere in the southern hemisphere to take full responsibility for impacts on seabirds and to become truly eco-friendly.”

The main challenge is enforcement. Dr Cleo Small who leads the BirdLife International Marine Programme (hosted by the Royal Society for the Protection of Birds) and a co-author of the paper, said: “Having enough ship-based observers can be difficult for large fleets operating in the high seas, but electronic solutions now exist, including tamper-proof video monitoring and satellite-surveillance to detect breaches. Action needs to be taken now by fisheries managers to ensure bycatch mitigation is mandatory and there is independent monitoring of compliance, particularly targeted at the areas, times of year and fleets with which birds overlap the most.”