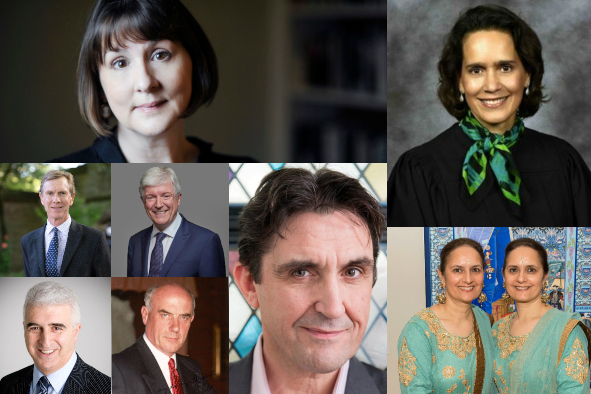 Liverpool-born Call the Midwife creator Heidi Thomas and actor Stephen McGann are among nine esteemed figures to receive honorary degrees from the University of Liverpool this summer. It will be a family affair for Heidi and Stephen who have been married for almost 30 years and work together on the hit BBC show.

University of Liverpool Vice-Chancellor, Professor Dame Janet Beer said: “I am delighted to be honouring these nine brilliant individuals who have all made significant contributions in their respective fields, making a positive difference to society in a wide variety of ways. They are superb role models for our students and I look forward to welcoming them to our graduation celebrations in July.”

Heidi Thomas is a multi-award winning screenwriter, producer and playwright. Born in Liverpool, she graduated from the University of Liverpool with a Bachelor’s degree in English Language and Literature in 1983 and began her career in theatre before going on to write for television and film. Today, she is best known as the creator of the global hit BBC series Call the Midwife and for her TV adaptation of the classic novel Little Women. Her other work includes Cranford, Upstairs Downstairs, Ballet Shoes and I Capture the Castle.

Stephen McGann is a leading actor, author and science communicator. Born in Liverpool, he began his acting career in 1982 in London’s West End and has since worked extensively on stage and screen, currently starring as Dr Turner in Call the Midwife. Stephen also holds an MSc in Science Communication and is a keen public speaker and writer on the social dimensions of science and medicine in popular culture.

Wendy Beetlestone is a Judge in the United States District Court of the Eastern District of Pennsylvania. After graduating from the University of Liverpool with a bachelor’s degree in Philosophy in 1984, she forged a successful career in broadcast journalism before entering the legal world. She was nominated to the bench by President Barack Obama in 2014 and was notably instrumental in issuing an injunction to block a controversial change to women’s reproductive healthcare rights by the Trump administration.

Lord Tony Hall CBE is director-general of the BBC and one of the key figures in the UK’s media and arts industry. Born in Birkenhead, he began his career as a BBC news trainee in 1973 and went on to become Chief Executive of BBC News and Current Affairs and Chief Executive of the Royal Opera House. He was awarded a CBE in 2006 and was made a life peer in 2010 with the title Baron Hall of Birkenhead.

Amrit and Rabindra Singh MBE – better known as the Singh Twins – are Wirral-raised contemporary artists whose award-winning work explores a broad range of social and political issues. Their recent exhibition, Slaves of Fashion, attracted over 105,000 visitors at Liverpool’s Walker Art Gallery and involved a close collaboration with Professor Kate Marsh at the University of Liverpool. They were made Honorary Citizens of Liverpool in 2010 and received MBEs for services to the Indian miniature tradition of painting within contemporary art in 2011.

Professor Ray Donnelly MBE is a retired Consultant Cardiothoracic Surgeon and Founder and President of the Roy Castle Lung Cancer Foundation. A pioneer in his field, he was the first person worldwide to remove a lung cancer using keyhole surgery. Since 1993 the Foundation has given £20 million in grants to the University and the results of this research has formed the basis for a lung screening programme to be rolled out by NHS England. He was awarded an MBE in 2009 for voluntary services to healthcare.

Sir Stephen Cobb is a Justice of the High Court and a University of Liverpool alumnus (LLB Hons Law 1984). After earning a reputation as one of the UK’s leading Family Law silks he was appointed a Judge of the High Court in 2013 and assigned to the Family Division. In his judicial role, he has taken responsibility for leading reform of the procedures for determining parental disputes concerning children, and for the resolution of family cases which involve domestic abuse.

Max Steinberg CBE FRSA is Chair of the Board of the ACC Liverpool Group, which runs the Arena and Convention Centre on the city’s iconic waterfront. As former Chief Executive of Liverpool Vision, he was instrumental in securing and delivering the first International Festival for Business, with the city successfully hosting festivals in 2014, 2016 and 2018. He was awarded an OBE for services to housing and regeneration in 1997 and a CBE for services to business and the community in 2013.

The honorary degrees will be conferred during a week of ceremonies at the Liverpool Philharmonic Hall from Monday, 15 July, in which more than 6,000 students will graduate.