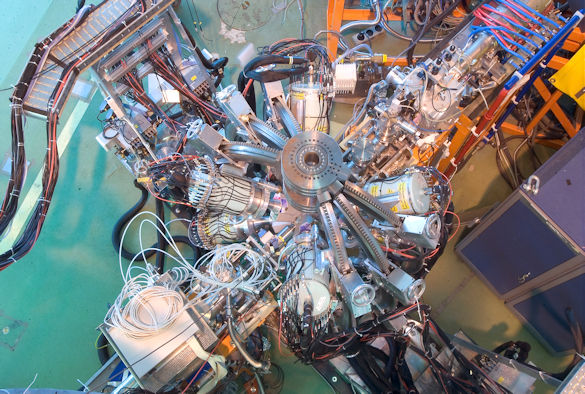 Image of the Miniball spectrometer used for the measurements

An international research team led by the University of Liverpool has made a discovery that will help with the search for electric dipole moments (EDM) in atoms and could contribute to new theories of particle physics such as supersymmetry.

Short lived isotopes of both radon and radium have both been identified as potential candidates for measuring EDM in atoms.  However, in a paper published in Nature Communications, researchers conclude for the first time that radon atoms provide less favourable conditions for the enhancement of a measurable atomic EDM than radium.

The researchers exploited the ISOLDE facility at CERN to accelerate beams of radioactive radon ions  and were able to measure the properties of rotating radon nuclei. The experiments showed that the radon isotopes 224Rn and 226Rn vibrate between a pear shape and its mirror image but do not possess static pear-shapes in their ground states. This behaviour is quite different to their neighbouring radium isotopes that are permanently deformed into the shape of a pear.

Liverpool Professor of Physics, Peter Butler, who is the lead author of the paper and spokesperson of the collaboration that carried out the research, said: “This research builds on our experimental observation of nuclear pear shapes in 2013.

“We find that certain radon isotopes vibrate between a pear shape and its mirror image.  This is in contrast to radium, where we have previously shown that some radium isotopes are permanently deformed into the shape of a pear.

“This finding is important for searches for EDMs in atoms which, if measurable, would require revisions of the Standard Model that could explain the matter-antimatter asymmetry in the universe.”

Image: Cartoon illustrating how the octupole phonon vector aligns with the rotation (R) vector (which is orthogonal to the rotating body’s symmetry axis) so that I = R + 3ℏℏ and Δi 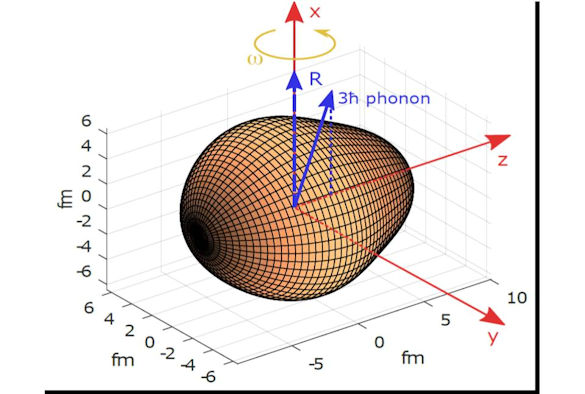