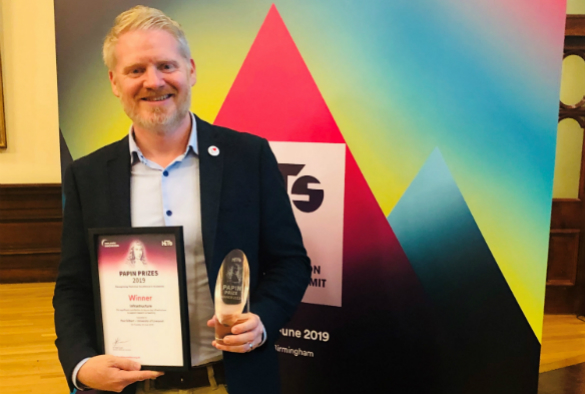 Paul Gilbert from the University’s Institute of Integrative Biology has won a prestigious Papin Prize in recognition of his technical excellence in supporting and delivering infrastructure.

The award was presented at the Higher Education Technicians Summit (HETS 2019), which aims to share best practice amongst higher education technical staff in UK, Ireland and beyond, and is the largest event of its kind in the country, with over 700 technicians attending.

Paul, who is the Technical Manager for the Institute, has led the development of SafetyNet which allows risk assessments, CoSHH Forms, etc to be recorded online. Paul’s nominator commented on how  ‘his innovative thinking is making Health and Safety accessible to all.’

Commenting on his award, Paul said: “The Higher Education Technician Summit was a fantastic event and gave me an opportunity to learn more about many of the innovative initiatives that technical teams are leading on across the UK HE sector. To have even been nominated for a Papin prize was a lovely surprise, but to actually win and be recognised at such an event is a huge and unexpected honour.”

Speaking about the Papin Prizes, Kelly Vere, Technician Commitment lead for the Science Council, said: “This year, the standard of entries for the Papin Prizes was incredibly high, so all of the technicians and technical teams that have been nominated for the awards should be very proud of their achievements.”

Dr Helen Turner, Director of Midlands Innovation, added: “I am particularly delighted that we have had so many entries for the Papin Prizes from right across the UK. This demonstrates that the excellent work which technicians do throughout the country is greatly appreciated by their work colleagues and students. I am pleased that through HETS and the Papin Prizes we are able to support technicians in HE and recognise their achievements.”