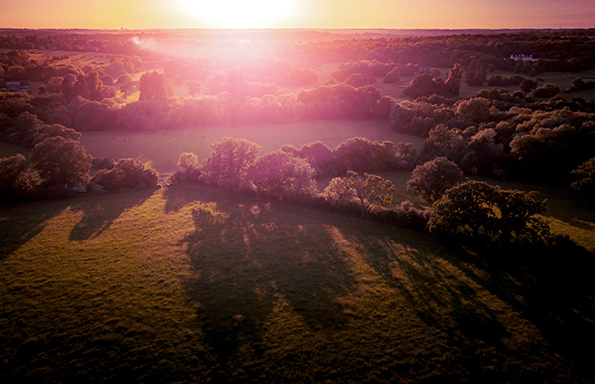 Entries span 500 years of weather history and relate to places across the UK (and Ireland), with a focus on five case-study regions: Central England, Southwest England, Eastern England, Wales, and Northwest Scotland. In addition to information on extreme weather events, you will find details of the original documents, their authors and the collections and repositories in which they are held.

Here we publish a selection from heatwaves of years gone by….

August 1857: “A lovely month with a succession of hot clear weather. The grain was nearly all housed by the 23rd inst. All nature still wears her summer garb. Besides being favourable to the farmer this month has been full of interest for the meteorologist in the occurrence of phenomena: a rainbow was seen on the 9th and the 20th which was seen the greater part of the day pm.  Thunder was heard on the 4th, 5th and 9th and a severe tempest broke over on the evening of the 12th after an excessive hot sultry day rain mingled with hail fell without intermission from 8pm to 11pm with heavy thunder and vivid lightning on the 13th day much cooler with tempest heavy from 11 am to 4 pm doing much damage in various parts of the kingdom.  Falling stars were noticed on the 14th and 29th inst.

The tempestuous heavy weather proved very beneficial to our crops likewise to our neighbours.

June 1858: The month opened with hot dry sultry weather which continued till nearly the middle of the month; a great relief was afforded on the 4th with a thunderstorm and a heavy refreshing shower the rain in depth being about ¼ inch, on the 9th we were again visited with thunder, rain and hail, the latter doing considerable damage in many parts of the kingdom. Here the damage was confined to the breaking of a few squares of glass but in places situated within 30 miles of London the damage done was considerable, beds of cabbage were riddled as if with heavy shot. Potatoes completely severed close to the ground and glass trachined in places, especially in the neighbourhood of Reading Berks, wholly deviated of glass and trees of their leaves. For several nights after this storm, lightning was frequent and unusually vivid, the atmosphere appearing so highly charged with the electric field as to present continued illumination.

July 1858: The dryness which formed so striking a characteristic of the last month has continued through this and has caused to the growing crops considerable injury. Turnips, swedes and other root crops are in places entirely destroyed. On 11 inst. at 1pm the hygrometer indicated 26deg of dryness with a brilliant sun. Insects of all kinds appear very numerous, especially red spider, whose ravages has extended to such an alarming rate as to threaten the destruction of the plants in beds. A hurricane occurred on the night of the 26th inst. doing considerable damage to the corn in exposed localities, such a storm of wind as prevailed in the night of the 24th and the morning of the 25th  is almost without parallel in this country. Trees are blown down, buildings and haystacks damaged and everything movable carried about in all directions.

Summer of 1864, from a letter to the Times Newspaper, included in Nethercote’s diary

Sir- droughts in this climate have been of rather frequent occurrence . Within the last quarter of a century five years have thus been characterised, namely 1840, 1844, 1852, 1863 and 1864. It is, however, in the spring when droughts have usually happened and in that season of the year they prevailed in the first four of the above. We have not had so dry a summer as the one as that just closed since 1800. Dry summers are therefore very rare. We have not had a hot summer since 1859 when the shade thermometer  exceeded 90 deg on several occasions.

Birmingham: (about the centre of England) the summer was the driest for 64 years, The total rain in two months ending the 27th August was under an inch . August was the driest ever known here up to the 28th. Only 0.21 inch of rain had fallen in the first 27 days.

1805 summer: This summer, that is 1805 there was more asps or wasps than ever I knew they were very troublesome and destroyed a deal of fruit and did a great deal of mischief.

Sept 7th 1805 the hay stacks that stood in Nottingham meadows and that stood nearest to the town were burnt. Most of them set on fire by one of Mr Hopton’s stack taking fire and the reason it took fire was it was got too soon. It had been on fire 2 days and about 2-3 o’clock on the 3rd morning the wind blowing very strong it blasted out and caught the other stacks that stood with it. There was 19 stacks and they was all burnt but one…

1809 hailstorm August the 10 about forty minutes past 10 o’clock there was such a hail storm as forever saw in my life before it as thundered most of the afternoon and rained some time but the storm began in an instant. The wind blew as if it would have tore the trees up by the roots and it began to hail and rain in such a manner as I never saw before and they was the largest hail stones that I ever saw I was afraid they would have broak the shop windows but they did not, they were some lay nearly ‘alf hour after it was over and it was soon over it lasted but about six-or-seven minutes. On Friday morning about seven o’clock there was another storm but not so violent as that on Thursday night – but the hail stones was much larger. I was informed that there were hail stone picked up three inches long and two inches and a half round with three or four sharp spikes to them. Thomas Wootton found one in the stable yard a very large one and Henry Francis found one in the hooking, a very large one. There was a many very large ones found by several different people and which measured three inches or there abouts and two and a half round.

In the year 1826, there was a very dry summer. It did not set in till the later end of May.

9 July a very hot Wednesday. Many people that dropped and died with the hot sun.

Peter Pegge-Burnell, farmer who kept a diary in Winkburn, near Newark, Nottinghamshire between 1789 and 1834 (Nottinghamshire archives, DD CW 8c) notes the following…

The weather is very hot and our springs very low. Such a season a few years ago, I remember, was followed by a number of putrid disorders which Stevenson imputed to the exhalations from the mud in the ditches and the pools, the water being quite gone. The boys should not be abroad either too early or late in the day and a cold infusion of bark might be of service as the autumn advances

This month is remarkable not only on account of the excessive heat which has prevailed for the last 20 days but also for the great length of time without any rain. We have had only one shower which happened on the evening of the 1st and that amounted to only one hundredth part of an inch – a circumstance which has not occurred since we kept a rain table. The springs are beginning to fail in many places and as the quantity collected in the last seven months is only one third of the annual average. It is much to be feared they will still continue to decline.

This year will be remarkable for the extraordinary drought which prevailed through a large portion of Great Britain throughout the entire summer. There followed some extremely hot weather.

Concerns over children being drowsy in the classrooms

July 8th work has been sluggish on account of the heat. There have been numerous cases of faintings

Newspaper cutting – The Marvellous Year, Some Reflections on the Summer of 1911 by Francis Kirkham.

From May until now, the third week of September, the weather over the greater part of England has been continuously hot and dry. The total of sunshine in July was the largest ever known. August was the hottest month for forty years, August 9th, with a shade temperature of 100deg at Greenwich, being the hottest day of which any record exists in England. On only one day in the month was the maximum less that 70deg. The Greenwich registers over a period of sixty-five years show that on average the English summer has fifteen days upon which the thermometer marks a maximum of 80 deg or more. So far, in 1911 there have been thirty-five such days as against forty in the historic summer of 1868, the only one in the lifetime of people now living which can compare with the present season. But the especial distinction of 1911 is that on considerably more than half of the thirty-five tropical days the mercury rose above 85deg.

Previous droughts, we have to go back twenty-four years, to 1887 to find the duration of the present drought exceeded – 25 days ending July 3rd 1887.

June 8 1947
We have a terrific heatwave for more than a week – the thermometer at Kew beating all records & here it touched 90.
June 11
Another heatwave. I feel rather oppressed & exhausted
June 27
While I write a welcome thunderstorm & rain is going on. Rain is badly wanted for all the crops.

Midnight heat wave in Britain on June 2. It can now be told that Britain had a “blitz” heatwave on June 2. It was one of the strangest and swiftest heat waves ever to strike this country. And the peak of the wave occurred, not during the day, but at midnight. People who had been wearing their overcoats in the morning were sitting in their shirt-sleeves in the late evening. In London the thermometer registered only 57 degrees in the morning. By 10pm the temperature had risen to 73 degrees, and ta midnight London was the hottest place in the British Isles, with a temperature of 77 degrees. According to the Air Ministry’s weather reports, Chester registered only 70 degrees, level with Bristol, Birmingham, and Ross-on-Wye. Police had a busy time round emergency water supply tanks trying to prevent children from using them as swimming baths. Ice cream supplies ran out very early in the heat wave owing to the sudden enormous demand.