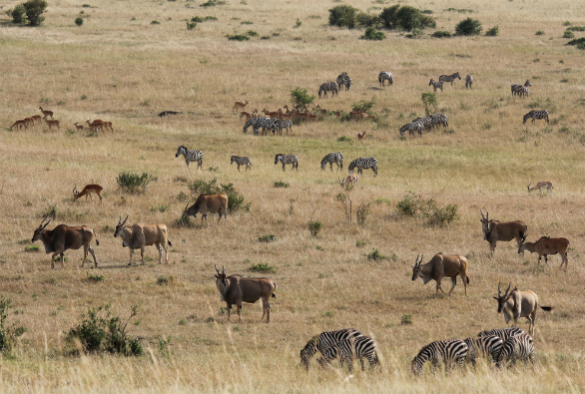 When it comes to choosing which other species to hang out with, wild animals quite literally change their minds with the weather, a new University of Liverpool study reveals.

The findings, which are published in the journal Philosophical Transactions of the Royal Society B, could help conservationists better predict the risk of extinction faced by endangered species.

“In the wild, a species always exists as part of a community of other species which affect its survival. These interactions are crucial when it comes to predicting extinction risk: if we focus only on single species in isolation we may get it very wrong,” explains the leader of the research team Dr Jakob Bro-Jørgensen from the Institute of Integrative Biology.

In this study the researchers aimed to uncover if species alter their preference for different social partners when their environment changes – a central question to forecast how current environmental changes caused by humans are likely to affect animal populations and communities.

Over a year, they followed the distribution in space and time of a dozen species inhabiting the Masai Mara plains in East Africa, including buffaloes, giraffes, zebras, antelopes, ostriches and warthogs, to see how the strength of social attraction within individual species pairs changed between the wet and dry season.

All of the savannah herbivore species underwent seasonal changes when it came to their social groupings, with rainfall affecting half of all the possible species pairs.

The researchers suggest that this could be due to a number of reasons, including species migration, climate adaption and feeding preferences. For example, the presence of migrating wildebeest during the dry season may provide a welcome social partner for some, like zebra, but be avoided by others, like buffalo, while arid-adapted species, such as gazelles, ostrich and warthog, may group together during the dry season but separate during the wet season.

“Our study shows that the dramatic changes that humans are causing to the environment at present, be it through climate change, overhunting or habitat fragmentation, will likely create indirect consequences by changing the dynamics of ecological communities,” says Dr Bro-Jørgensen.

“This can cause unexpected declines in species if critical bonds with other species are broken. A particular concern is when animals find themselves in novel conditions outside the range which they have been shaped by evolution to cope with,” he adds.

Following on from this study, the researchers now plan to investigate how predation and feeding strategies interact to drive the formation of mixed-species groups.

The study is published in a special themed issue of the journal edited by Dr Bro-Jørgensen and colleagues, which looks at how behavioural ecological research can provide critical information for population modelling in conservation.

Read an interview with Dr Bro-Jørgensen about the special issue here.

Linking behaviour to dynamics of populations and communities: application of novel approaches in behavioural ecology to conservation, Phil Trans R Soc B, https://doi.org/10.1098/rstb.2019.0008