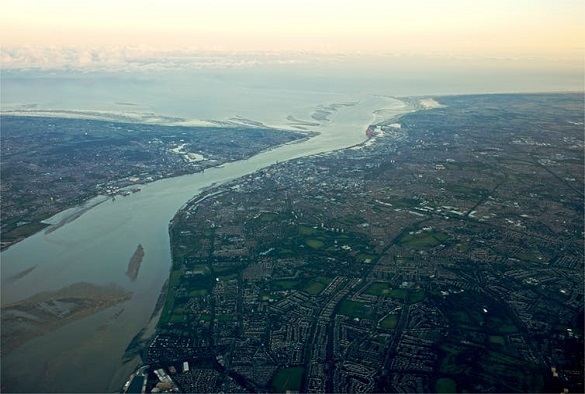 This article by Amani Eva Becker, Research Impact Fellow in Coastal Resilience in the University’s Department of Geography & Planning, was first published by `The Conversation’:

Liverpool has declared a climate emergency. The mayors of both the city itself and the surrounding “city region” have recognised the emergency, and both have suggested that a tidal barrage on the River Mersey could form part of the solution. And on a recent visit to the city, Labour leader Jeremy Corbyn said his party would support the £3.5 billion project.

Two years ago, I teamed up with colleagues at the National Oceanography Centre and University of Liverpool to look at how to realise the River Mersey’s energy potential: we concluded that a tidal power station could be part of the solution.

So what actually is a “tidal barrage”, and why do we think the Mersey is so suitable?

A tidal barrage generates electricity in a similar way to traditional hydroelectric power, using a dam (or barrage) to create a difference in height between two bodies of water. As tidal waters flow in and out of the estuary, the barrage blocks the flow, raising the water level on one side. When the desired difference in water level is reached, the water is then allowed to flow through turbines, generating electricity. Tidal barrages can operate in both directions and, as the tide goes in and out twice a day, are capable of producing electricity four times a day.

A few different factors make the Mersey an ideal place for a barrage. Its tidal range (the difference in water level between high and low tide) can be 10 metres or more at spring tides – the UK’s second highest, while a narrow channel at its entrance (known as “The Narrows”) means the barrage could be shorter and thus cheaper to construct. It’s also close to a large urban area, with lots of electricity demand.

We estimated a Mersey barrage could produce 0.9 to 1.5 terawatt hours of electricity each year. A terawatt is a million million watts, so this is a lot of energy – enough to supply electricity to about 300,000 homes, or more than all the homes in the city of Liverpool.

The technology has been around for a while. The world’s first tidal barrage was completed in 1966 on La Rance river in Brittany, France, and is still operational today. However, the high initial costs and potential environmental impacts mean there are still very few of these projects worldwide.

The idea to generate energy from the River Mersey’s tides was first put forward in 1981, with a series of proposals and feasibility studies since. As ever, the key issues are financial and environmental.

Who will pay for it?

Financial issues came into focus in June 2018 when the UK government rejected proposals for a similar “tidal lagoon” power station in Swansea Bay on the grounds of “value for money” compared to nuclear power and offshore wind. That’s despite Swansea tidal power having received strong backing in an independent review the government commissioned 18 months previously.

This raised questions about how tidal energy generation capacity will become a reality for the UK. Jeremy Corbyn said a Labour government would pay for a Mersey barrage but, at this point, it seems that it would only happen under a Conservative government if privately funded – as with the Swansea Lagoon.

The Mersey is also a busy commercial waterway. Some disruption during construction would be inevitable, and designers would have to figure out how to best allow shipping access through locks built alongside the barrage.

The environmental implications are difficult to predict. At La Rance, sand-eels and other marine fauna initially suffered, but after ten years a new biological equilibrium was reached and the estuary was once again considered richly diverse.

In the Mersey, one major concern is that a tidal barrage would likely mean less exposure for the estuary’s mudflats, which are an important feeding habitat for migratory birds. Here, impacts could be reduced by generating electricity on both the ebb and flood tides, as opposed to one way generation on the ebb tide.

Two way generation reduces the time the tide is held back, and thus there is less difference in height between water on either side of the barrage – generation may be reduced overall, but it is better environmentally. If used in the Mersey, two way generation would almost maintain the size of the intertidal area.

It will be hard to build a tidal barrage without at least some local environmental impact. The same could be said for almost any renewable energy project, however, and by reducing carbon emissions tidal energy could deliver environmental benefits on a much larger scale.

A barrage could also create a pedestrian and cycle link between Liverpool and the Wirral. Finally, as recognised in the government-commissioned report, large tidal energy projects could see the UK use its expertise in maritime engineering to develop technology for export worldwide.

If the environmental and financial issues can be resolved, a tidal barrage across the Mersey would provide a substantial amount of renewable electricity for many years to come, as well as a clear statement of the UK’s progress to achieving zero carbon energy.