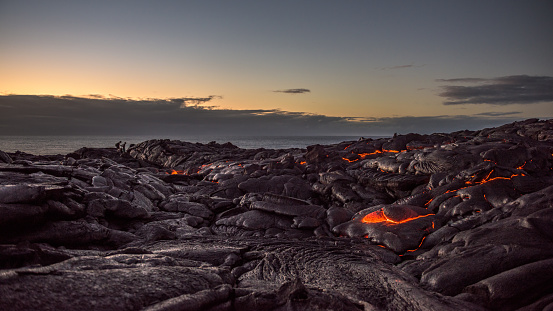 Walking on a field of lava on the Pacific coast near Kalapana on the Big Island of Hawaii at dawn.

A researcher with the University’s Department of Earth, Ocean and Ecological Sciences is part of an international team that has found conclusive evidence that volcanic hot spots are not fixed but are moving.

Volcanic hot spots such as the ones that created the Hawaiian Islands have long been considered stationary points, created by processes deep within the earth’s interior.

The research, published in Nature Communications, solves a major debate about the origin of the large-scale structure of the earth’s surface and deep interior.

What are hot spots?
The earth’s lithosphere is the outermost shell of our planet, composed of seven major puzzle pieces known as tectonic plates. While today each of the tectonic plates roughly encompasses one of the seven continents and the Pacific Ocean, scientists believe the pieces once fit together to form supercontinents. Earth’s last supercontinent, Pangea, began to break apart about 175 million years ago. Much of the earth’s seismic activity, including earthquakes and volcanoes, occurs at the boundaries of the tectonic plates.

But there are other regions on earth characterized by volcanic activity, independent of the plate boundaries. Researchers refer to these areas as hot spots. Hot spots are thought to develop above abnormally hot upwellings of magma in the earth’s mantle called mantle plumes. Although researchers cannot travel to the mantle to observe these processes, they are able to infer hot spots because of the volcanism that develops when the magma pushes through the lithosphere. The most active hot spots include those beneath Yellowstone, the Galapagos Islands, Iceland, and Hawaii.

Fixed vs. moving hot spots
The theory of plate tectonics was widely accepted in the 1960s, but, Professor Tarduno, said: “Deciphering the past motion of Earth’s tectonic plates and linking these motions to deeper processes within the earth is an ongoing challenge in the geosciences.”
For decades after the plate tectonics revolution, researchers thought hot spots were fixed, providing a reference frame to measure the motion of the earth’s plates.

An iconic illustration of this idea was the 60-degree bend in the chain of islands that make up Hawaii. Researchers believed the Hawaiian Islands were created via an assembly line-like process: an island would form over a hot spot, the motion of the plate would move the island off the hot spot, and the hot spot would remain in place and generate a new island.

In 2001, Professor Tarduno and his colleagues collected samples of rocks and sediment via scientific ocean drilling in Hawaii’s Emperor Seamounts—undersea, extinct volcanoes in the Pacific Ocean. By studying the magnetism locked in the ancient samples—a field known as paleomagnetism—the researchers determined that the hot spot beneath Hawaii was not fixed but had moved. This painted a picture more consistent with an actively convecting and constantly churning mantle. Despite this evidence, however, controversy over the fixity of hot spots continued.

Large regions of hot spots
The debate was heightened when researchers recognized that many hot spots were rooted in one of two large regions above the core-mantle boundary: one region under Africa and the other under the Pacific.

Research by seismologists indicated these were regions, known as large low-shear-velocity provinces (LLSVPs), where seismic waves travel slowly. The slow speed meant the regions were unusually hot or chemically different from surrounding rock.

The new analyses conducted by this research team, including modeling, geochemistry, and paleomagnetism, suggest LLSVPs are in motion, relics of subduction that has been taking place since the breakup of Pangea.

Professor Tarduno said: “LLSVPs are clearly ancient, greater than 100 million years old, but some researchers have claimed they are also fixed and thus can be used as a reference frame for plate motion, The new analyses suggest that LLSVPs can attract mantle plumes until the LLSVPs and the mantle plumes merge.”

Liverpool researcher Dr Richard  Bono said: “Our work combines palaeomagnetic data, detailed seamount ages and models for the distance between hot spots to build a time line of when the Hawaiian hot spot was, and was not, moving in the mantle.  To determine where tectonic plates used to be in the past, we need a mantle reference frame. Our work helps understand how this reference frame has changed during the last 30 million years.”

The researchers also discovered that LLSVPs can undergo large-scale motion comparable in speed to the motion of the tectonic plates. This provides even more evidence that it was the motion of hot spots—and not their fixity—that caused the bend in the Hawaiian Islands.

The paper `Hotspot motion caused the Hawaiian-Emperor Bend and LLSVPs are not fixed’  9doi: is published in Nature Communications.