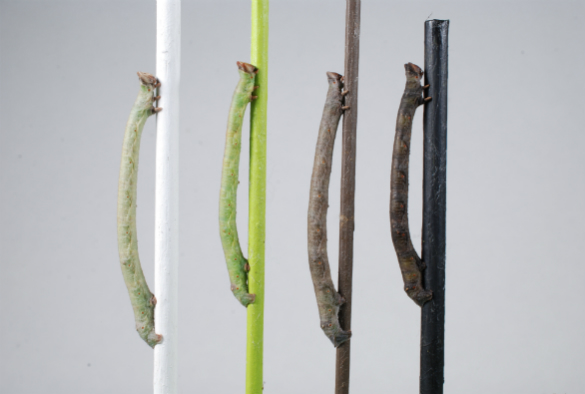 It is difficult to distinguish caterpillars of the peppered moth from a twig. The caterpillars not only mimic the form but also the colour of a twig. Now researchers at the University of Liverpool and the Max Planck Institute for Chemical Ecology have solved a long-standing scientific riddle by showing that the caterpillars can sense the twig’s colour with their skin.

In a study published in Communications Biology, caterpillars that were blindfolded changed the colour of their bodies to match their background. When given the choice of which background to rest on, the blindfolded caterpillars still moved to the background that they resembled. The researchers also found that genes that are required for vision were expressed not only in the eyes of the caterpillars but also in their skin.

Cephalopods, chameleons and some fish camouflage themselves by adapting their colour to their surroundings. These animals may have a system to perceive colour and light independently of the eyes. Some insects, such as caterpillars of the peppered moth (Biston betularia), also match their body colour to the twig colour of their food plant; although this colour change is rather slow compared to other animals. Until now, scientists have assumed that colour-changing insects perceive the colour of their environment exclusively through their eyes. The study shows that some species, such as the peppered moth, have evolved an additional visual sense.

“Peppered moth caterpillars mimic twigs to avoid being detected and eaten by birds. Because the twigs that they might find themselves on can differ in colour and pattern, they have evolved to change colour. It seemed to us that the precision with which they can do this was at odds with the relatively simple structure and position of their eyes,” explains Professor Ilik Saccheri from the University’s Institute of Integrative Biology.

“We started to look at expression of opsin genes, which are typically associated with eyes, in different tissues and were surprised to discover that they were expressed across the caterpillar skin. We then tried the blindfolding experiments, and repeated those several times to confirm the results,” he adds.

First author Dr Amy Eacock, who carried out the work while a PhD student at the University of Liverpool before moving to the Max Planck Institute for Chemical Ecology, adds: “We constructed a computer model that can ‘see’ the same way birds do, so we are able to conclude that these adaptations—colour change, twig-mimicking, behavioural background-matching – likely evolved to avoid visual detection by predators. Caterpillars with better colour sensing may have been eaten less by birds, while birds with improved vision may prey more upon these larvae, continuing the evolutionary predator-prey arms race.”

For more background and information about this study, read Dr Eacock’s ‘Behind the paper’ blog here.