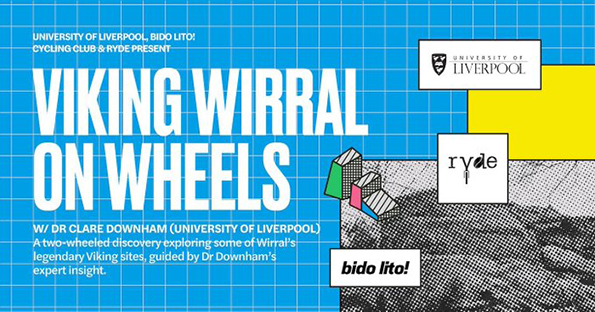 Explore Viking Wirral on Wheels with the University of Liverpool’s Dr Clare Downham, as part of the inaugural Future Yard festival.

Building on the success of The Viking Age in the North West app, Future Yard organisers, Bido Lito! have teamed up with cycling group, Ryde to offer a leisurely tour of the peninsula, all informed by Dr Downham’s research.

A Reader in Viking Age History in the University’s Institute of Irish Studies, Dr Downham delivered the content for the app which was launched in partnership with the University’s Computing Services Department.

And after Bido Lito! caught wind they decided to develop an event that would allow enthusiasts to join their fellow travellers on a two wheeled trip into Wirral’s distinct culture – all with personalised expert commentary.

Dr Downham said: “I think the intention of the festival is to showcase Wirral and Birkenhead, so it’s an opportunity to find out about the local area, its history, and what makes it unique.

“Just as the culture of today’s Merseyside reflects the people who came into the area, this also applies to the historic culture of a region that had its doors open to the whole world, based on its location.”

At the beginning of the tenth century, Vikings settled in Wirral and created their own mini-state, with its parliament or ‘thing’ at Thingwall.

Proud locals displayed their success, fashionable taste and sense of identity by commissioning sculptured monuments, some of which can still be seen today. A living tradition of Viking-inspired folklore flourished into recent times.

At Thurstaston, the Norse god Thor is said to have dropped his magic hammer, while Cnut was claimed to have set up his throne on the seafront on Leasowe and challenged the tide not to come in and dampen his feet.

It all takes place on Saturday August 24, with the ride setting out from Birkenhead Priory at 10.30am. The 90 minute cycle will cover around ten to 15 miles on both roads and pathways, before finishing back at Birkenhead Priory where Dr Downham will deliver an illuminating talk on Wirral’s distinct Viking heritage.

Dr Downham added “It’s an opportunity to learn, even for local people who might not realise this stuff is on their doorstep.

“It’s living heritage – a chance to visit these sites and hear the stories and legends that bring them to life.”

Wirral Viking on Wheels takes place on August 24 and is open to all Future Yard ticket holders. Participants will need to provide their own cycle and helmet. To find out more, please visit https://futureyard.org/wider-programme/viking-wirral-on-wheels/