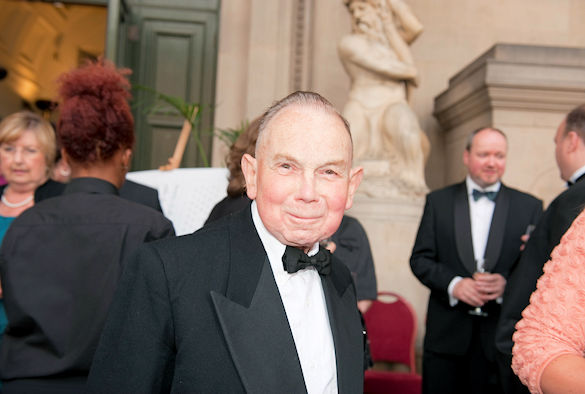 The University is saddened to learn of the passing of our former Head of the Department of Medicine, Professor David Alan Price Evans, who passed away aged 92 on the 29 August 2019.

Professor Sir Munir Pirmohamed, the David Weatherall Chair of Medicine, NHS Chair of Pharmacogenetics at the University, Director of the MRC Centre for Drug Safety Science and Wolfson Centre for Personalised Medicine, has provided a tribute to David:

“David Price Evans has made a very great personal contribution to the proud history of medical education on Merseyside. His entire career, from student to distinguished professor, has been in association with the University.

He was born in Birkenhead but his father Owen Evans worked in the Post Office, and his job took the family to various locations in North Wales. Here he grew up, in a proudly welsh-speaking family. He entered the University of Liverpool to read medicine in 1945, when the city was severely bomb-damaged, and the great majority of students were ex-servicemen. A brilliant undergraduate career followed. He took an intercalated first class honours degree in 1948, in the disciplines where Liverpool has its enduring intellectual strengths in Biochemistry and Physiology, and graduated MBChB in 1951.

After graduating he served in the Army for two years with the Royal Medical Corps, and then embarked on a medical career of conspicuous success. He completed his training in Liverpool from 1955 to 1958, and then began his research career under the guidance and support of two of the giants of academic medicine in Liverpool, Henry Cohen, a key begetter of the National Health Service, and Sir Cyril Clarke. At his suggestion David Price Evans went to Johns Hopkins University in Baltimore for a year in 1958, and worked with Victor McKusick in the area of clinical genetics, work which would lead to his Liverpool MD in 1960.

David Price Evans’s research brought him a central role in the development of the field of Pharmacogenetics, which, anticipating the advent of ‘personalised medicine’, works from the idea that individual people react to drugs differently depending on their genetic constitution. This abiding research commitment established him as one of a handful of influential medical scientists who have made a significant personal contribution to this major global field, and led to the publication by Cambridge University Press in 1993 of the standard monograph Genetic Factors in Drug Therapy. By this time his career had travelled far. A lectureship in Medicine at Liverpool in 1960 was succeeded by promotion to Professor in 1968, and in 1972 Professor Evans succeeded Sir Cyril Clark as Chair and Head of the Department of Medicine at Liverpool.

However after ten years in this key role Professor Evans was ready for fresh challenges, and in 1983 he became Director of Medicine at the Riyadh Armed Forces Hospital in Saudi Arabia. This was a major new arena, in which he flourished for almost twenty-five years, supervising the design and building of new facilities and developing both the clinical activity and significant research facilities.

Such a career brings rewards. Beginning with nothing but his own talents, dedication, and powers of application, David Price Evans has earned great and richly deserved success through a long, varied and distinguished career. His income from Medicine has also been supplemented by success as a farmer in Wales. However, he chose not simply to enjoy the benefits of this success. In his own words, ‘someone who has worked in, and been supported by his University, should give something back’. In that spirit, David Price Evans, in an act of extraordinary generosity gifted to the University the funding to endow two Chairs in the Faculty of Medicine: the David Price Evans Chair of Medicine, and the Owen and Ellen Evans Chair of Oncology.

I first came across David when I started as a medical student in Liverpool. I became interested in the concept of pharmacogenetics because of his work. His excellent textbook on Genetic Factors in Drug Therapy, published in 1993, was at a time when I had just finished my PhD, and helped me think about my future research directions. I had the great pleasure of showing David round the Wolfson Centre for Personalised Medicine when it was opened in 2009. He was pleased to see how the University had made use of this historical building and was able to recall with delight old stories of his days as young doctor and Consultant in the Liverpool Royal Infirmary.

David will always be recognised by the University for his services to medicine and his generosity and vision as a benefactor.”