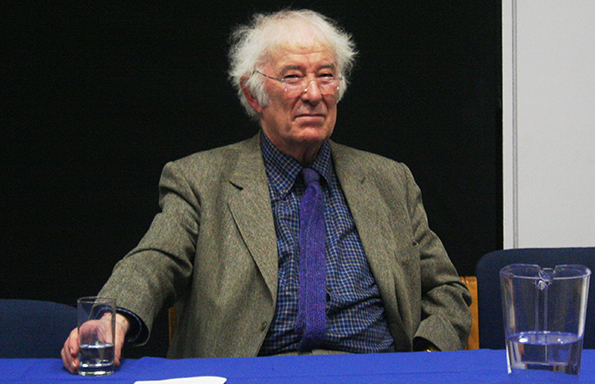 The University of Liverpool’s Institute of Irish Studies is honoured to announce the establishment of the annual Seamus Heaney Lecture, named in memory of the world-renowned poet, playwright, translator and Nobel Laureate.

Professor Peter Shirlow, Director of the Institute of Irish Studies, will welcome Seamus Heaney’s wife, Marie; daughter, Catherine; and sons, Christopher and Michael, to the city for the inaugural event on October 17. They will be joined by Professor Louise Richardson, Vice-Chancellor of the University of Oxford, who will deliver the inaugural lecture; and actor, director and playwright, Adrian Dunbar, who will recite three Seamus Heaney poems.

The annual Seamus Heaney Lecture will seek to reflect the values of the man, and his ability to communicate and connect with a wide audience. It is hoped the lecture will become a major cultural event in the life of the city, providing a space to contemplate Heaney’s work and the ideas that engaged him. It is the first lecture to be named after a writer by the Institute and is presented with the full support and cooperation of the Estate of Seamus Heaney.

Seamus Heaney, who was born in Northern Ireland but lived in Dublin for many years, died in 2013. He would have been 80 years old this year.

Speaking on behalf of the Estate of Seamus Heaney, his daughter Catherine Heaney said: “We are extremely proud that the University of Liverpool’s Institute of Irish Studies has chosen to honour my father Seamus Heaney, by inaugurating this annual lecture in his name.

“With its joint patrons HRH the Prince of Wales and the President of Ireland, the Institute makes a fitting home for such a tribute, particularly at a time of such critical importance for relations between the two islands, and in the year of what would have been my father’s 80th birthday.”

The inaugural Seamus Heaney Lecture, entitled Airs and Graces, will be delivered by Professor Louise Richardson, Vice-Chancellor of the University of Oxford. Professor Richardson worked alongside Seamus Heaney while both were at Harvard University, a period during which he also served as Oxford Professor of Poetry. The world renowned Irish political scientist was also the personal contact when Seamus Heaney was conferred with an Honorary Degree by St Andrews University, during her tenure as Vice Chancellor.

Professor Richardson will be joined by the highly regarded actor, director and playwright, Adrian Dunbar; perhaps most recognisable for his portrayal of Superintendent Ted Hastings in recent BBC thriller, Line of Duty.

Professor Peter Shirlow said: “Seamus Heaney was a person who was prominent within so many of our lives. Many of us came to appreciate poetry and wider cultural imaginings and understandings of place and identity through his prose, wit and care.

“He was not only an immense talent but a person who could be so self-effacing and humble.  He was a man who delicately healed many of the wounds within Ireland in a manner that was thought provoking and graceful.

“We are indebted to The Estate of Seamus Heaney, in trusting the Institute of Irish Studies to host this prestigious annual lecture and to Professor Richardson who will deliver the first lecture. Adrian Dunbar, who will read from Seamus Heaney’s work is also to be thanked for his support of this event.”

Born and raised in County Derry, Seamus Heaney was the author of more than 20 volumes of poetry, translations and criticism and is widely recognised as one of the major poets of the 20th Century. He won the Nobel Prize in 1995 “for works of lyrical beauty and ethical depth, which exalt everyday miracles and the living past”.

His daughter, Catherine Heaney, added: “We are especially delighted that the first Seamus Heaney Lecture will be delivered by Professor Louise Richardson, Vice-Chancellor of the University of Oxford, who shared many connections with him, and that his poems will be read by Adrian Dunbar, one of our finest actors.”

University of Liverpool student, Michael Farley will also be presented with the first Seamus Heaney Annual Student Prize for the best undergraduate essay in Irish Literature.

The Seamus Heaney Lecture takes place from 6pm on October 17 in the Victoria Galley & Museum’s Leggate Theatre. The event is now fully booked but to join the waiting list, please visit www.eventbrite.com/e/inaugural-the-annual-seamus-heaney-lecture-2019-tickets-62507348161