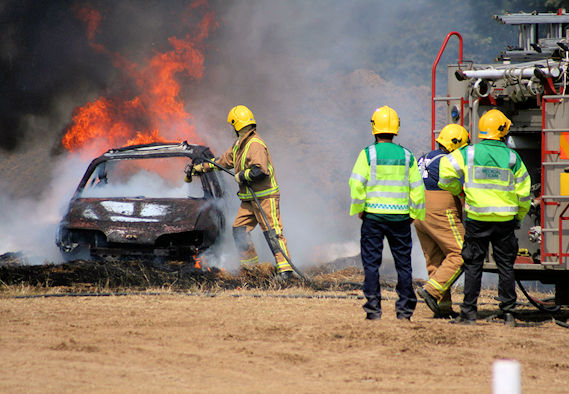 Professor Laurence Alison is Director of the Centre for Critical and Major Incident Psychology at the University.

University of Liverpool Alumni Dr Neil Shortland is Director of The Center for Terrorism and Security Studies at the University of Massachusetts Lowell.

“When faced with a rapidly advancing fire threatening a community, it can be hard to know how best to save lives.

Is a rapid evacuation better, or is it safer for residents to stay where they are? The whole situation can change in an instant, and delays and indecision can be fatal.

As wildfires spread across California, a report about a massive fire in London in 2017 can offer useful lessons for emergency managers and residents.

Inside the Grenfell Tower fire

On June 14, 2017, a refrigerator in a London apartment had an electrical malfunction that started a fire. For the first two hours after the fire was reported, officials told the apartment building’s residents not to evacuate. Rather, they recommended people stay in their apartments and trust the building’s design to contain the fire to the unit where it started.

The city’s fire officials were faced with two types of potential tragedy: people dying in their apartments or getting injured or killed trying to evacuate.

In hindsight, they took too long to realize the fire was out of control, and to change their instructions, telling people to get out. Less than four hours after it started, the fire had engulfed the 24-story Grenfell Tower, home to just under 300 people, of whom 72 died.

A similar problem has arisen in California wildfires – including in 2018, when delays in the order to evacuate the town of Paradise, California, led to the deaths of 56 people.

As scholars who study human decision-making in potentially fatal circumstances, we’ve learned that many people, even trained military personnel and emergency responders, find it hard to make decisions in extreme situations, such as large fires.

The resulting delay, which we’ve called “redundant deliberation,” happens when people take too long to make a choice between difficult options.

We’ve found indecision is the most dangerous aspect of a high-stakes situation. We have also proposed theories about the origins of this delay, and how it can be overcome, in our recent book, “Conflict: How Soldiers Make Impossible Decisions.”

Our research has found that redundant deliberation is more likely to occur when there is no standard policy to guide decision-makers, or, as in the Grenfell fire, when the normal practice doesn’t fit the actual circumstances.

Many apartment buildings’ fire plans involve telling residents to stay put, because fireproof walls, floors and ceilings are designed to contain flames to the apartment where they started.

That was the plan at the Grenfell Tower. London fire officials stuck to that advice even as the fire spread into dozens of neighboring apartments.

Their error was in relying too much on fixed rules and written policies, rather than understanding how best to protect human life in a rapidly changing fire that defied the expectations those policies relied on. The London fire chiefs’ years of accumulated firefighting experience had not prepared them to handle what happened at the Grenfell Tower. It was simply too rare an event, with much more at stake than in other fires.

Our research has developed a better way to train people to act decisively in urgent situations. Instead of being slowed into indecision by rules and experience, quick-thinking leaders need to be creative, adaptive and imaginative.

We have developed a way to teach people to transcend their past training through a method of guided imagination we call “grim storytelling.” It’s based on scenario-centered discussions in which the participants create situations (often from their own experiences) for their colleagues to work through, in the military and aviation communities.

In sessions we conducted, we had three groups of four people. Each group developed a scenario that was based on a real situation they had dealt with in the past, but far more complicated and challenging. Each group then presented the others with the scenario and asked them to choose a course of action from several options, all of which looked quite bad.

For example, one group presented a scenario of lone shooters attacking civilians around the city. The event became a hostage situation at a local hospital, then got more complicated when a group of armed civilians arrived, saying they would “storm the hospital” if local police weren’t going to.

The most helpful grim stories are those where the group members coming up with the scenario disagree about what option they would choose, or where circumstances require decision-makers to question the standard existing policy or practice.

Some grim stories even have built-in ambushes, like the hospital standoff, where the scenario looks to be unfolding in one way but something happens to change it completely, and responders must deal with the new event.

We’ve found that as military and law enforcement personnel work through these hypothetical situations, they learn a lot about their own values and those of others. They find opportunities to test different policies and flexible problem-solving approaches. Our method is inexpensive and efficient, too, because people can talk about situations without having to physically create or re-enact them. Even when, as happened with the hospital standoff, participants find themselves unable to decide in time, they can gain a real appreciation for how hard some decisions can be and how easy it can be to fall victim to redundant deliberation.

Whichever method is used, grim storytelling – a skill informed by storytelling and even creative writing – forces people to think in new and unfamiliar ways that can improve their decision-making in real situations that unfold unexpectedly.”