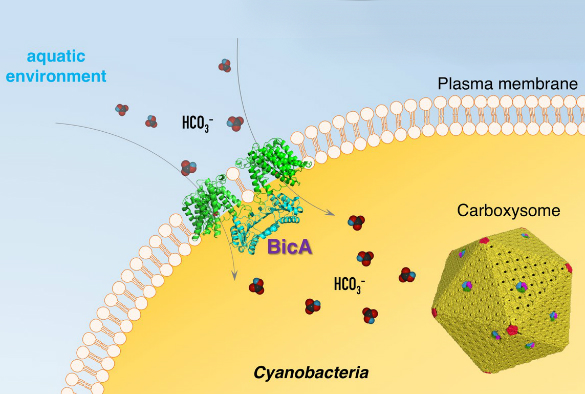 Scientists have unveiled the molecular structure of a membrane transporter that is responsible for carbon assimilation in cyanobacteria – major contributors to photosynthesis and global carbon fixation.

The study by researchers at the University of Liverpool’s Institute of Integrative Biology and Chinese Academy of Sciences has been published online in Nature Plants.

The conversion of carbon dioxide and water into sugar is one of the most important biological processes for life on earth. Up to 90% of carbon dioxide exists in the form of bicarbonate (HCO3−) in the ocean, which covers 71% of the Earth’s surface.

To improve carbon assimilation, cyanobacteria, the most common bacteria in the ocean, use specific transport proteins in cellular membranes to “pump” HCO3− into the cell. The enriched HCO3− inside the cyanobacterial cell is then used by an enzyme known as Rubisco, which is encapsulated within a protein-based organelle called the carboxysome.

The researchers used state-of-the-art protein crystallisation and cryo-electron microscopy to obtain the three-dimensional structure of a key HCO3− transporter (BicA), and explored the locations of the transporters in cells using fluorescence microscopy, with the support of the University’s Centre for Cell Imaging.

Professor Luning Liu, a Royal Society University Research Fellow in the Institute of Integrative Biology said: “Bicarbonate transporters are essential not only in bacteria, but also for human health and disease. This study provides further insight into the generic principles that form bicarbonate transporters to work.”

The study also revealed that the active BicA transporter functions as a dimer formed by two copies of single BicA enzymes, leading the researchers to propose an “elevator transport” mechanism that could be a common mechanism for other HCO3− transporters.

Professor Liu added: “We are excited about the research outputs. Understanding how HCO3− transporters fulfil their functions in nature is important in the field of CO2-concentrating mechanisms. Our work represents a step towards installing functional carbon assimilation systems in crop plants, to improve photosynthesis and crop yields in the long-term.”