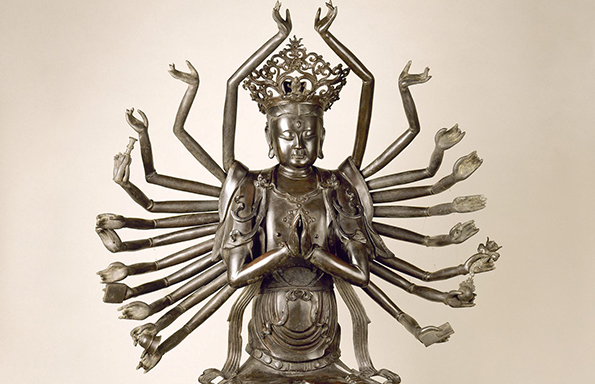 What can objects reveal about the motivations behind and impact of Britain’s conquest and colonisation of a quarter of the world’s peoples – or that of similar acts by other European states? Or about the legacies of such acts, not just on the peoples colonised, but on ‘us’ as well? And why don’t British museums, which are packed full of objects looted or stolen through empire, or obtained through unequal power relations, deal with the problematic origins of such objects in their displays – or seek to return such objects to their rightful owners?

It is such questions that drive my project, “Untold Histories of Empire”, a collaboration with World Museum, for this year’s Being Human Festival. The project involves a range of activities. These include tours on what empire was and how it operated (November 15) and the imperial histories of objects in the museum (November 22). They also include public debate on whether National Museums Liverpool should return objects taken from originating communities during empire (November 16) and a debate among University of Liverpool students on how both British museums and universities should address difficult histories to do with empire (November 20).

The main feature of the project, however, is a trail that museum visitors are invited to explore, between November 14 and 23, on the imperial and colonial histories of objects in the museum’s collection (assisted, on the 15-16 and 22-23, by University of Liverpool History students). The objects range from natural history ‘specimens’ to human remains (namely an Egyptian ‘mummy’), and from a knife with a handle carved from a tiger’s bone to three sculpted heads severed from ancient Buddhist monasteries in what is today northwest Pakistan.

It is the severed heads that I’d like to focus on here, because they resonate with recent acts of vandalism, cultural desecration and theft. In 2002, for example, border control at Heathrow found nine fourth-century Buddhist heads in fruit crates that, as St John Simpson, a senior curator at the British Museum, put it, had been “beheaded”, most likely by the Taliban, during its “iconoclastic” phase.

The British Museum restored the heads after their “traumatic ordeal” and put them on display before repatriating them to Afghanistan. But while for Simpson, “The return of any object which has been illegally trafficked is hugely important symbolically”, for the British Museum, as well as other UK museums, such concerns do not apply to objects such as the severed heads, hacked off not by “iconoclastic” members of the Taliban but by the British – an ordeal as undoubtedly “traumatic” as beheading at the hands of the Taliban – at World Museum. When the repatriation of items from British museums that have been historically looted is raised, British museums invariably propose loaning objects to their countries of origin, rather than returning them (though World Museum is proposing to develop a cultural artefact return policy).

To understand why this is the case, we need to go back to the late nineteenth century. Although European legal codes and military conventions enshrined the principle that artworks should not be plundered during wartime, this only applied to what were perceived to be “civilised nations”. The denial of such a status to subjugated peoples served to legitimise their material exploitation while preventing any reflection on the impact, or morality, of empire. The aestheticization of objects plundered from such peoples in museum spaces erased, in turn, the violence and injustice of their acquisition.

That such beliefs and practices did not disappear in the nineteenth century is evident in Britain’s efforts to repatriate Nazi loot from the end of the Second World War while sedulously ignoring the demands of post-colonial countries for the return of their cultural property. While we cannot right the wrongs of the past, it’s time we do something about their legacies.