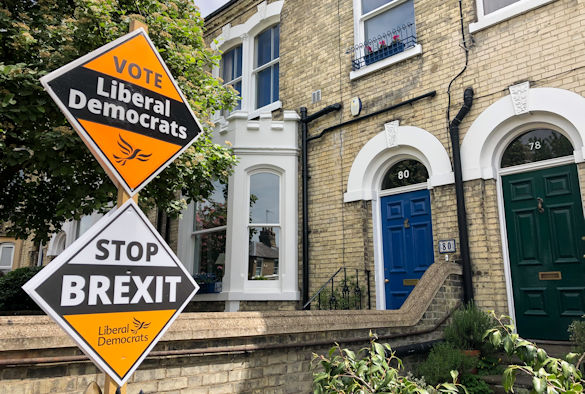 Professor Andrew Russell is Head of the University of Liverpool’s Department of Politics.

As Jo Swinson took to the stage in a TV studio in Sheffield for the leaders’ Question Time event, she probably knew that her party faced the all too familiar electoral challenges that had bedevilled her predecessors for decades. The phoney war of the unofficial campaign had seen thousands of Focus/In Touch newsletters, with their countless constituency surveys, all adorned with the face of the new leader and the occasional mystifying bar chart showing that “only the Lib Dems can win here”.

Swinson began the campaign with the bold claim she was setting out to become the prime minister. Yet, no more than a few weeks later, a much more defensive (and familiar) strategy has emerged. The third party in a system designed to cope with two, always seems to be defined in relation to the others, picking up contingent votes of defectors from one party, and tactical converts from another. This should hardly surprise Liberal Democrats but yet again the party seems to have been caught on the hop.

The manifesto, launched in a London nightclub, encapsulated the challenges the Liberal Democrats face in carving out a distinctive space for themselves in the political arena. The drive for popular and distinctive policies too often appears secondary to the challenge of actually proving the party’s relevance to the general public.

Essentially, the Lib Dems gambled that the 2019 election was about – and only about – the UK’s exit from the EU. The policy package in the manifesto seems secondary to the party’s pledge to “Stop Brexit”. The clear hope was that by designing a raft of policies around this single issue, the party could capitalise on significant remainer support.

The signs from the 2019 local and European elections were promising. Nevertheless, this general election campaign – like most before it – has failed to follow the preordained script and the Liberal Democrats have found it hard to cut through to the 48%.

In the Brexit election that might or might not be, even fervent remainers may decide to cast their vote on other issues, or for other parties that might stand a better chance of winning in their local constituency.

In fact, the party policy of halting Brexit proclaims that a Liberal Democrat government would revoke Article 50, despite the discomfort of some in the party who were worried that apparent disregard for the outcome of the 2016 referendum would hardly seem liberal and was insufficiently democratic. The small print reveals that this is the policy only if the party wins an outright majority. In all of the more likely scenarios the Liberal Democrats would fight for a second referendum at the very least.

This is not the first time the party has sought a unique selling point at election time. In 2010, much was made of the Liberal Democrat pledge to end student tuition fees and in the 1990s the party struck gold with their policy of putting a penny on the marginal rate of taxation to pay for education. This tax pledge was popular. Evidence from 1992 and 1997 demonstrated that it was favoured by voters from all parties – and that is the point.

Voters liked the “magic penny” policy and – more importantly – knew whose policy it was. But the public simply failed to vote for the Lib Dems in sufficient numbers. People had other priorities and ring-fencing tax money for schools was not one of them. So having a Unique Selling Point (USP) is not enough. Voters need to be confident that voting for the party with that USP will not be a waste of time and effort.

Hypothecated taxation pledges have returned to the 2019 Liberal Democrat manifesto. The current leadership must hope that the penny rise in income tax to fund health and social care is more effective than the 1992 version. Elsewhere in the manifesto, Liberal Democrats propose to spend the economic dividend from abandoning Brexit on education, teacher training and free childcare for toddlers.

The climate emergency will be addressed by taxing frequent flyers, reducing the cost of rail fares for commuters (but stopping short of renationalisation) and with a public commitment that by 2030, 80% of energy in the UK will be generated from renewable sources. On the economy, the Liberal Democrats frame themselves as the party of fiscal prudence in a direct attempt to win over Tory remainers in Conservative/Liberal Democrat marginals.

There are few policy surprises but the Liberal Democrats remain the party of contradiction. Our own research has shown how the party is emphatically bottom-up in terms of organisation and it continues to rely heavily on the appeal of the leadership. Other studies have also shown that the leader’s activities are particularly important to Liberal Democrat electoral fortunes.

Yet in an election where both main party leaders provoke considerable negative reactions, Swinson has failed to connect with the public.

During the first week of the campaign, Swinson’s net approval ratings tumbled from -9 to -23 and the audience at the leaders’ debate seemed anxious to make her account for her personal voting record in the austerity coalition. Being front and centre of the party’s campaign does not seem to be paying off for now at least.

As our findings from the 2015 and 2017 campaigns emphasised, the party devotes a lot of energy attempting to convince voters it is a viable choice in a particular constituency and yet remains critically vulnerable to the “wasted vote” syndrome.

And in the election that was supposed to be dominated by Brexit, the SNP in Scotland and the Conservatives and Labour in England and Wales might yet again squeeze out the party with the most emphatic pro-European stance.