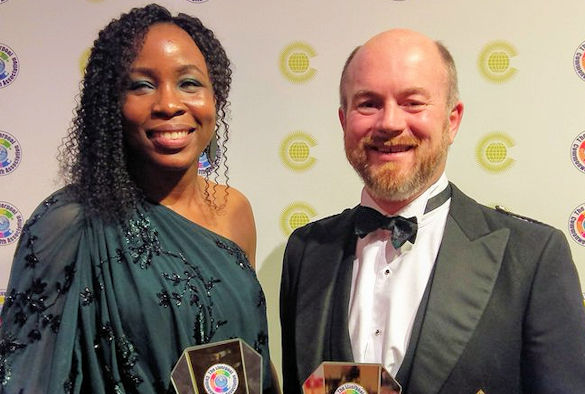 Dr Cole and Professor Semple at the LCA Winter Ball

Two clinical academics, Professor Calum Semple and Dr Christine Cole, have received personal awards from The Liverpool Commonwealth Association (LCA) for their service to the Ebola Crisis 2014-2016, and survivor healthcare in Sierra Leone.

In 2014, the World Health Organisation (WHO) asked Professor Calum Semple, an expert in clinical virology, to lead a mission to Sierra Leone in the escalating phase of the Ebola outbreak, specifically with the purpose of assessing the country’s capacity to conduct research to treat this terrible disease.

Professor Semple led a consortium of investigators from University of Sierra Leone, the Connaught Hospital and Republic of Sierra Leone Armed Forces Joint Medical Unit along with international partners. Together they ran the first clinical trial in Sierra Leone since the civil war ended in 2002.

It was during this trial that he worked with Dr Christine Cole and her colleagues. Their research activity in Sierra Leone continued after the end of the Ebola outbreak with focus shifting to study the health problems affecting many Ebola Survivors. His team published a seminal paper describing Post Ebola Syndrome.

During the LCA’s Winter Ball, Professor Semple and Dr Cole were presented with personal awards by the University’s Director of Clinical Academic Development, Paul May, in recognition of their work during the crisis.

Of the award Professor Semple, said: “To receive such an award is testimony to the great work of the research consortium and ongoing efforts of our partners in Sierra Leone.”

Calum Semple is a Professor of Child Health and Outbreak Medicine at Liverpool University where he conducts research on severe viral infections. He also works at Alder Hey Children’s Hospital.

Dr Cole is currently working at the Royal Liverpool University Hospital as a Specialist Registrar in Clinical Pharmacology.

LCA is a non-profit organisation that represent the interests of businesses (public, private and charities), individuals and groups from a Commonwealth background within the Liverpool City Region (LCR), by acting as a connectivity platform to boost the region’s economy.