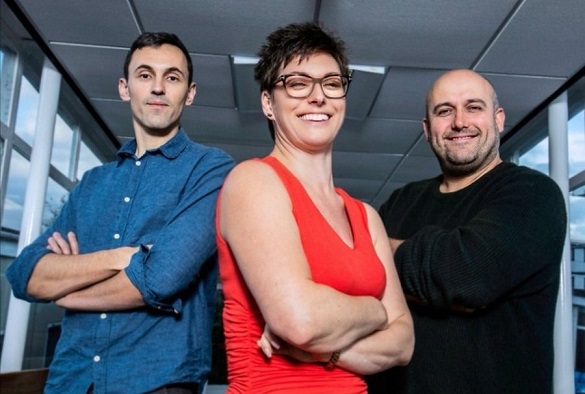 A University physicist is part of a team who won an RNIB See Differently Award  for developing the Tactile Collider project, an immersive workshop which teaches visually impaired students about accelerator physics in a fun, accessible way,

This award, sponsored by Heathrow, is presented to an individual or organisation that has demonstrated and applied a new product, technology, or service which has significantly benefited people who are blind or partially sighted.

The Tactile Collider project, which is funded by the Science and Technologies Facilities Council, aims to promote a love of science among blind and partially sighted students. It offers a unique, two-hour workshop that to date has been delivered to over 20 schools nationwide.

The idea for Tactile Collider stemmed from the realisation that conventional museum-style exhibits, talks, TV and video aren’t always accessible to a blind or partially sighted audience, as they often rely on visual modes of communication. The Tactile Collider team worked with people with sight loss to find new ways to educate pupils about particle physics through touch and sound. Their workshop uses sound recordings and tactile models to teach the audience about particles, accelerators and magnets.

The workshop is also designed to inspire teachers working with pupils with vision impairment too, by sharing ideas as to how content can be delivered simply and effectively. The Tactile Collider website hosts full lesson plans linked to the National Curriculum.

Earlier this year the Tactile Collider team received widespread recognition for their pioneering work, after being awarded the prestigious 2019 Outreach Prize from the High Energy and Particle Physics Division of the European Physical Society.

Robyn Watson, one of the developers of the Tactile Collider, said: “We are absolutely delighted to win, the other shortlisted projects in the category were fabulous, it’s really quite humbling. We are excited to work with more young people over the coming years, and really hope that we pass on the message to students and teachers alike that science can be made accessible to people with visual impairment.”

The RNIB See Differently Awards aim to shine a spotlight on the excellent work happening every day across the UK to support people with sight loss. They highlighted the contributions being made to break down barriers and rewarded those creating opportunities that enable blind and partially sighted people to live the life they want to lead.

RNIB CEO Matt Stringer said: “The RNIB See Differently Awards celebrate those who dedicate their time, passion and skills to changing the world for blind and partially sighted people. All our winners have shown fantastic examples of this and I warmly congratulate them all on their success.”