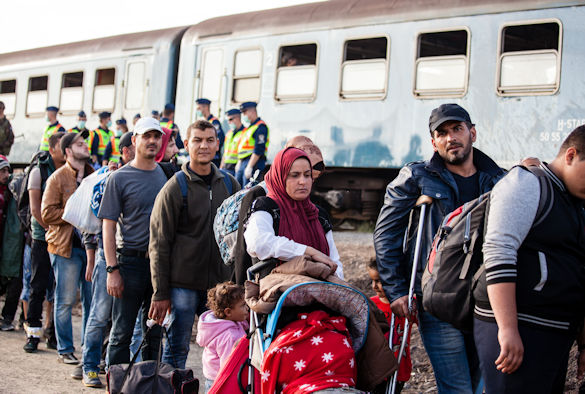 Researchers have launched a new Liverpool City Region based study to improve the health of asylum seekers and refugees.

Researchers from the University of Liverpool with support from two other universities (Bangor and Liverpool John Moores) and four local voluntary organisations (Asylum Link, Person Shaped Support, Red Cross and Refugee Women Connect) have launched the PROSPER Trial to examine the effect brief psychosocial interventions have on the mental health and wellbeing of distressed asylum seekers and refugees.

Asylum seekers and refugees mostly come from developing countries where there is abuse of human rights, war and conflict. Consequently, many suffer from physical and mental health problems due to their experiences and untreated illness in their home countries, multiple dangers while travelling and the difficulties they face when they arrive.

In the UK, they often do not receive the help they need to address their mental health problems. Several barriers prevent them making use of the health care system and they commonly receive care only in an emergency. Usually the possible support they can access is from people in voluntary organisations who, although highly motivated, may not be skilled in helping people with high levels of distress.

Problem Management Plus (PM+) is a psychological intervention, recommended by the World Health Organization for distressed adults living in adversity. Delivered by lay therapists, it offers people the skills they need to improve their management of practical and common mental health problems.

In a recent study in a conflict-affected region of Pakistan PM+ improved people’s mental health and their ability to lead their daily lives. However, PM+ has yet to be tried among socially excluded groups such as asylum seekers and refugees living in the UK.

As part of the study researchers from the University’s Institute of Population Health Sciences, led by Professor Christopher Dowrick, will recruit over 100 asylum seekers and refugees to take part in the trial that will involve them being randomly allocated to individual PM+, group PM+ or peer support through a local voluntary organisation. They will be seen again by the researcher after three and six months.

Professor Dowrick, said: “Liverpool is a City of Sanctuary, and has a proud history of welcoming people from all parts of the world. We are keen to find out if this new intervention can help to reduce the distress experienced by many asylum seekers and refugees in our City region.

More information about the trial can be found here.