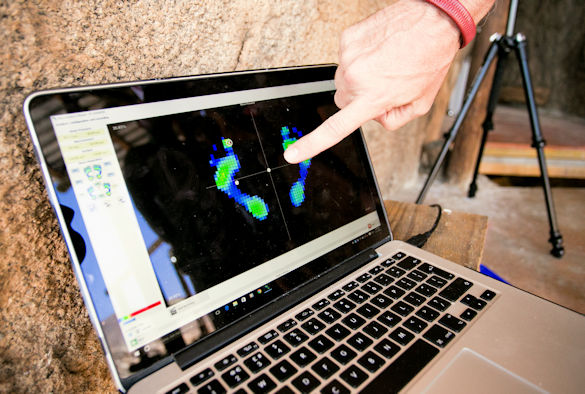 University of Liverpool research, published in Clinical Biomechanics, reveals certain types of conventional footwear are not as beneficial to balance and stability for older people as specially designed minimal footwear.

Research conducted by the University’s Musculoskeletal Biology Department, in collaboration with Vivobarefoot, has revealed that wearing minimal shoes may improve stability and physical function in middle-aged and older people compared to conventional shoes. This study confirms a growing body of data that minimal shoes offer certain benefits over conventional heeled, padded, and ‘supportive’ shoes.

This insight could lead to changes in the way that clinicians and shoe designers think about how our choice of footwear affects us, findings that, if implemented, could lead to increased stability in older people.

Carried out at the University of Liverpool’s Movement Laboratory, 22 people participated in the experiment in which they were asked to perform a range of movements wearing conventional shoes and 12 different models of specially designed minimal footwear. Overseen by Dr Kris D’Août and Dr Tomasz Cudejko, in partnership with geriatrician Dr Asangaedem Akpan, the experiment utilised the state-of-the-art equipment in the Department’s Movement Laboratory to measure the stability of participants during standing and walking, performance-based physical function, as well as their perceptions of footwear in regards to attractiveness, comfort, and acceptability. Results show participants were more stable with wider-soled minimal shoes than in a conventional shoe.

Dr Kris D’Août, Senior Lecturer at the Musculoskeletal Biology department, University of Liverpool, said: “Our study adds to the increasing body of evidence that for many people, less (shoe) is more. A minimal shoe helps our feet to be used how they are supposed to. I believe that footwear design should be evidence-based rather than just aesthetical. Our feet are our only point of contact with the environment, so having the right shoe for the right foot is crucial.

“By systematically exploring how shoes change our gait, we can make solid recommendations to the industry and to clinicians. Our own and other people’s research increasingly shows that the human foot is amazing as it is, and the less we mess with it, the better. As a university, it is important to do unbiased research and feed results to the industry. This requires an open mind from both sides. In this project, Innovate UK brings together two such partners working together to try and design the best possible shoe, which is very exciting.”

Galahad Clark, founder and CEO, Vivobarefoot, added: “This research confirms what we have thought for a long time and is why we started making barefoot shoes. The human foot is a biomechanical masterpiece and we want to rescue it. Modern footwear is too narrow and technology such as cushioning is interfering with our feet – not helping them.

“As a result, much of the Western world is suffering with chronically weak and deformed feet. It is a public health scandal and many wearers are none the wiser! We want people to reconnect with the world around them one step at a time.”

According to a survey released earlier this year, commissioned by Age UK, millions of older people are worried about falling over, with 4.3 million (36%) stating that it topped their list of concerns.

Previous research, also by Age UK, revealed up to one in three (3.4 million) over 65s suffer a fall each year, costing the NHS £4.6 million a day. In general, falls are estimated to cost the NHS more than £2.3bn per year, according to the National Institute for Health Care and Excellence (NICE).

The study concludes that those participating seemed to prefer a more classical looking minimal shoe rather than the higher or split-toe versions.

Funding for the research was provided through the Government’s modern industrial strategy by Innovate UK, part of UK Research and Innovation and is one of a number of investigations and research projects organised as part of the partnership between Vivobarefoot and the University of Liverpool.

Current ongoing projects are investigating the physical benefit of minimal footwear not solely for older people, but for the population as a whole, which are due to be completed in the second half of 2020.

Dr Cudejko and Dr D’Août are looking for participants for further studies. If you live in the Liverpool or Wirral regions, are aged 60 or above and have had an episode of a fall after age 60, please contact t.cudejko@liverpool.ac.uk