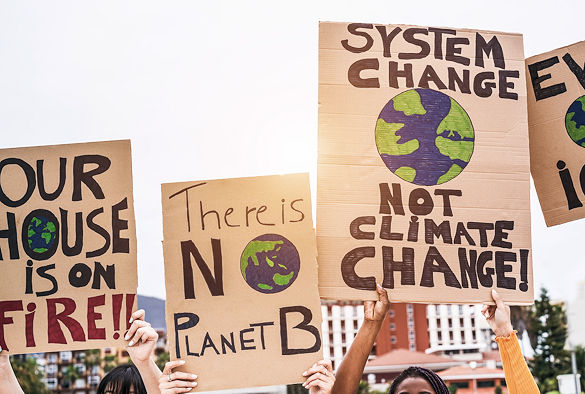 Dr Robin McKenna is a Lecturer in Philosophy in the University’s Department of Philosophy:

Climate change sceptics may be a minority, but they are a sizeable one. One in five Americans think that climate change is a myth, or that humans aren’t responsible for it. What’s more, they’re backed up by many in the Middle East and parts of Asia, especially China. They’re a vocal minority too – and with the ear of the US president, they are therefore a serious obstacle to collective climate action.

So what can we do about them?

You might think that the answer is more or better science education. The more you know about climate science, the more likely you will be to think that climate change is real.

But the science says that this isn’t true. If you want to predict what someone’s attitude to climate change is, you are better off asking them about their politics than about science. In fact, in the US, the more numerate and scientifically literate a Republican you are, the more sceptical you are about climate change.

What climate science really needs is better marketing. Researchers might think that the science sells itself. But, while people might trust scientists in general, the picture is more mixed when it comes to politically charged issues such as climate change. With many politicians actively persuading people that the science isn’t that serious, we need to persuade people that these politicians are wrong and the climate scientists are right.

And luckily, there are three key marketing tools we can use to do so.

Think about how climate change is framed. We are usually asked what we as individuals, businesses, and states can do to reduce the carbon emissions that are undoubtedly but imperceptibly heating up the planet. Given that these emissions have powered the global economy’s growth over the last century, this narrative can sometimes be perceived as pitting science against free market economics and our desire to lead our lives as we choose.

This framing doesn’t work for all audiences. Just as a good marketer fits their message to their audience, a good science communicator will understand that when communicating an issue so broad and that affects so many, it makes sense to frame climate change in different ways to different groups of people.

Debunks of climate myths abound on the internet. But debunking misinformation is tricky, because once a piece of informatin has entered someone’s mind, it’s hard to dislodge it – especially if the information confirms previously held beliefs.

An alternative strategy is “prebunking”. Inspired by inoculation theory – the idea that it is better to a prevent a disease than to treat it – prebunking aims to prevent misinformation from spreading in the first place, rather than debunk it once it has spread.

This can be done by identifying common argumentative strategies used by climate change sceptics, such as spurious appeals to expertise or exaggerations about the uncertainties in climate models, and explaining why they are dodgy.

Of course, this information needs to reach the right people. Much like protection against disease, the most effective inoculation starts in childhood, with education. Misconception-based learning, an approach which sets out to avoid misconceptions, provides a framework for doing this. Climate breakdown is not a flash in the pan problem, and our strategies to combat it need to be designed for the long haul.

Finally, it’s important to focus not just on the message, but the messenger too. We would rather listen to people who share our political views than “experts” who disagree with us. This means that if you want to effectively communicate a pro-science message, you need to have people from different corners of the political spectrum making the case.

It’s great that activists like Greta Thunberg are spreading the word, but not everyone wants to listen to them, and there are politically diverse groups out there who share the same message. For instance, when he was president Barack Obama reached out to religious leaders, who played an active role in promoting environmental issues in their communities.

Marketing is manipulative. It can try to trick us into buying things we don’t want. So using it to sell climate science and interfere with our basic right to make up our own minds might seem suspect.

But it’s important to remember that while climate change is a contentious political issue, its effects are real and severe no matter what you, I or anyone else think. We have the right to decide how or even whether to change our behaviour in light of a destabilising climate. But we don’t have the right to decide that our actions have no impact on the climate. As the saying goes, we are not entitled to our own facts.

What’s more, there is a difference between the aims of marketers and those of scientists trying to communicate with the public. The marketer wants to sell us stuff. The scientist wants us to break through our ideological biasesand apathy to engage with the truth.

The strategies I have outlined are designed to create the conditions for these breakthroughs. They don’t detract from our ability to make up our own minds. In fact, they may enhance it, precisely because they neuter our ideological biases. Sometimes, we need a little help to think for ourselves.

Of course, good marketing is no guarantee of a sale. Even if scientists use these methods, climate change sceptics may refuse to buy it. But good marketers also don’t give up. If these methods don’t work, we can always look for some other ones.