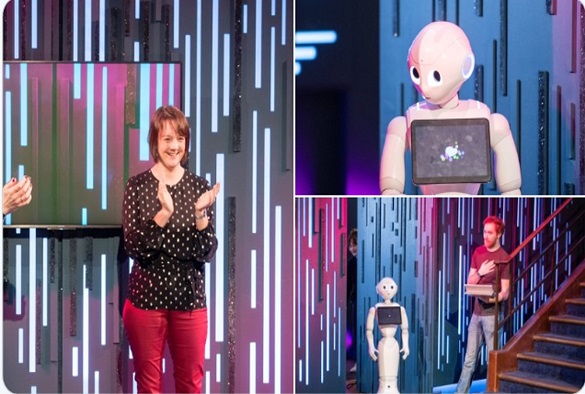 Professor Katie Atkinson, an internationally recognised expert in the field of artificial intelligence and law, discussed the opportunities and challenges of using AI in the legal sector as part of the Royal Institution’s prestigious Christmas Lectures series.

Presented by Dr Hannah Fry, the Ri Christmas Lectures explored over three episodes the hidden power of mathematics and the many different and surprising ways it controls our daily lives.

Professor Atkinson, who was joined on stage by Pepper, the University’s humanoid robot, discussed with Hannah how algorithms and mathematical models are being implemented in software programmes to help judges and lawyers with decision support.

Pepper reported on a past real-life legal case from the US that a team from the University has used as part of a set of test cases to show how AI technology can replicate legal decision making. Joe Collenette, who is the University’s Industrial Strategy Fellow in AI and Law, supported the technical operation of Pepper for the Lecture.

The Christmas lectures are available to watch on BBC iPlayer and Professor Atkinson appears in episode three (from 23 minutes): https://www.bbc.co.uk/iplayer/episodes/b00pmbqq/royal-institution-christmas-lectures

She said: “It was a great honour to take part in the Royal Institution Christmas Lectures having enjoyed watching them myself for years. With some assistance from our Pepper robot, we discussed how AI is being used in the legal field and what future developments in this area will and will not look like. We don’t expect humanoid robots to be appearing in the courtroom, but decision support software that can reason about and explain legal arguments is a particular feature of Liverpool’s research on AI and Law that is moving towards deployment. I hope the Christmas Lectures have helped to provide a wide audience with an insight into the exciting research that is currently being developed within the field of AI and Law.

Dating back to 1825, the Royal Institution’s Christmas Lectures are the UK’s flagship science series and are shown on national television every year. First broadcast in 1936, they are the world’s longest running science TV series.

Professor Katie Atkinson, who is also Dean of the School of Electrical Engineering, Electronics and Computer Science, is part of a national panel set up last year by the Lord Chief Justice to ensure the Judiciary of England and Wales is fully informed about developments in artificial intelligence.