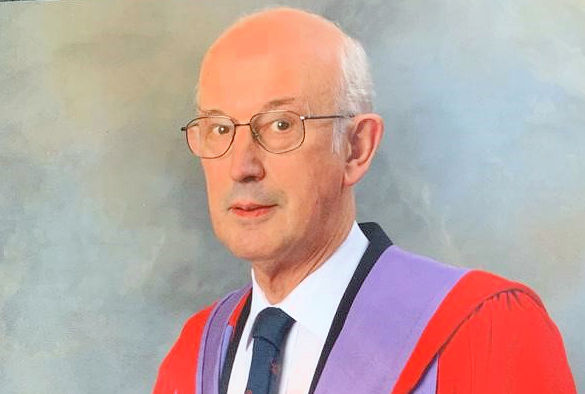 The University is saddened to learn of the passing of Sir Alasdair Muir Breckenridge who passed away aged 82 on the 12 December 2019.

Professor Sir Munir Pirmohamed, the David Weatherall Chair of Medicine, NHS Chair of Pharmacogenetics at the University, Director of the MRC Centre for Drug Safety Science and Wolfson Centre for Personalised Medicine, and his son Dr Ross Breckenridge have provided a tribute to Alasdair:

“Physician, academic, medicines regulator and clinical pharmacologist, who was instrumental in improving public health through better use of medicines.

Alasdair Breckenridge made a great personal contribution to UK academic medicine over 50 years, and can rightly be regarded as one the giants of UK medicine in the 20th Century. He was one of a small group of individuals who established the medical specialty of Clinical Pharmacology and Therapeutics. Although a small specialty, it punches well above its weight, largely because of the type of work Sir Alasdair and his successors have undertaken, and the influence that they have had on health policy.

Sir Alasdair attended Bell Baxter High School in Cupar, and obtained a Harkness Scholarship to study Medicine at the University of St Andrew’s in 1954. He graduated in 1961 winning the Captain W.A Low Memorial Medal, awarded to the best medical graduate of the year. After doing his house officer jobs in Dundee, he moved to the Royal Postgraduate Medical School (RPMS) at the Hammersmith Hospital in London, where he received specialist training in Clinical Pharmacology working with eminent physicians such as Sir John McMichael and Sir Colin Dollery. His impact at the RPMS as a trainee is evidenced by the fact that he was appointed a Consultant Physician and Senior Lecturer from 1969 to 1974.

In 1974, Sir Alasdair moved to the University of Liverpool to become Head of Department of Pharmacology, where a new Chair in Clinical Pharmacology had been created. He stayed in Liverpool until his retirement in 2003. In a recent interview for the British Pharmacological Society, he stated that his greatest achievement was the establishment and development of the modern Department of Molecular and Clinical Pharmacology at the University of Liverpool. The Department was struggling in 1974, and through visionary appointments of young academics and the development of a research ethos where clinical and non-clinical scientists worked seamlessly to foster translational medicine approaches, Sir Alasdair was able to transform the Department into an internationally recognised research powerhouse, which it still is to the present day, a testament to his legacy. The Department was honoured with a Queen’s Anniversary Prize for Higher Education and Innovation in 2018.

Over a period of 50 years, Sir Alasdair’s research contributions were extensive, with many publications in prestigious journals including The Lancet and British Medical Journal. His work in hypertension was able to highlight the role of insulin resistance, a seminal contribution. Throughout his career, he produced influential papers on drug-drug interactions; amongst the most important was his work on interactions with warfarin, a drug which is still used by 1% of the UK population. The findings of that work are integral to the prescribing information used by doctors worldwide today, and its importance was recognised by the Royal College of Physicians through the award of the Goulstonian Lectureship. Working in conjunction with the Liverpool School of Tropical Medicine, he also developed research in the area of infection pharmacology, which is now more important than ever, given the concerns about antimicrobial resistance. He was able to identify new areas and opportunities for pharmacology throughout his career. For instance, when AIDS was a relatively new disease, and novel drugs were being developed, he encouraged research in this area, which eventually led to the development of a HIV drug interaction on-line resource, which is used by HIV doctors globally. His work was recognised by the award of a number of international prizes such as the Paul Martini Prize in Clinical Pharmacology, the Poulson Medal of the Norwegian Pharmacological Society, the Lilly Prize of the British Pharmacological Society, and Honorary Fellowship of both the Faculty of Pharmaceutical Medicine and the British Pharmacological Society.

Sir Alasdair’s contribution to the Nation and public service has achieved great recognition and eminence. He became Vice-Chair of the Mersey Regional Health Authority in 1990, and following various NHS mergers, he became Vice-Chairman of the NW Regional Health Authority in 1994, and then in 1996, Chairman of the NW Regional Office of the NHS Executive. Perhaps his greatest contribution to public service was in UK Medicines Regulation. He joined the Committee on the Safety of Medicines (CSM) in 1984, and following in the footsteps of such luminaries as Sir Derrick Dunlop, he was appointed chairman of CSM in 1994. It was therefore entirely fitting that in 2003 he was appointed inaugural Chairman of the Board in an expanded national regulatory authority, the Medicines and Healthcare Products Regulatory Agency (MHRA) that combined responsibility for regulating both medicines and medical devices. His clarity of vision and ability to encourage joint working were to be impressively demonstrated as the Agency later expanded its responsibilities to include Biological Standards, Blood Products, and the Clinical Practice Research Datalink.

Professor Angus Mackay who was a Non-Executive Director on the MHRA Board said: “During his ten-years as Chairman, Alasdair repeatedly emphasised the principle that it must be science that drives regulation. Under his chairmanship, the UK regulatory authority earned a global reputation for excellence and one in which the UK public could have confidence.”

Sir Alasdair never stopped working, retaining an active interest in regulatory science with his latest article published in September 2019. He was well known world-wide for his expertise in drug regulation and continued to lecture in this area well into 2019. Sir Alasdair received a CBE in 1994, and a Knighthood in the 2004 New Year Honours list for Services to Medicine.

Outside of his work, he enjoyed playing golf, often returning to his “hometown” of St Andrews to play on the famous course. He also loved walking, good food and wine, and Alasdair and Jean, his wife, were famous for their excellent dinner parties.

Sir Alasdair was a larger than life character with a formidable intellect, and will be much missed. He died peacefully at home surrounded by family. He is survived by his wife Jean, two sons, Ross and Bruce, and two grandchildren.”