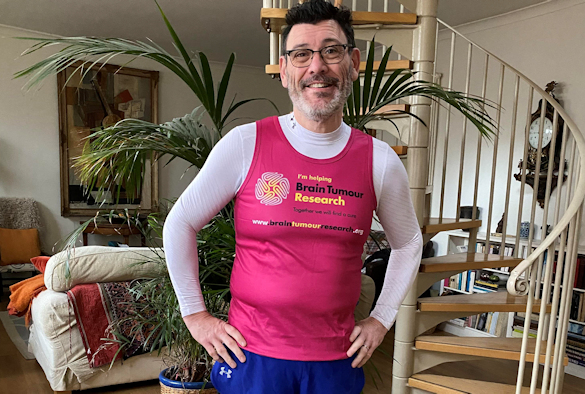 Professor Andrew Russell, Head of Politics, is taking on the Liverpool Half Marathon to raise money for the charity Brain Tumour Research.

Andrew is motivated by his stepson, Huw McCandless, a 32-year-old GP, who was recently diagnosed with an astrocytoma brain tumour. Huw’s diagnosis came after he suffered a seizure while driving on Boxing Day 2019.

Andrew said Huw had no major symptoms, prior to his seizure: “Huw had ‘fainted’ while running three months before Christmas but subsequent tests revealed no issue. Huw did have a headache on Boxing Day morning, which he put down to the excesses of the day before. With hindsight, he had some migraine auras and would occasionally feel dizzy while he was playing football but other than that he was symptomless.”

Huw, who lives in Disley in Cheshire with his wife Laura (a speech and language therapist), underwent emergency brain surgery at Royal Salford Hospital on 17 January 2020. The operation lasted 7.5 hours and he was awake for much of it, being woken up and asked to perform simple tasks such as speaking, moving his hands and feet and other basic neurological tests, to ensure parts of the brain controlling these vital functions were avoided in the incision. 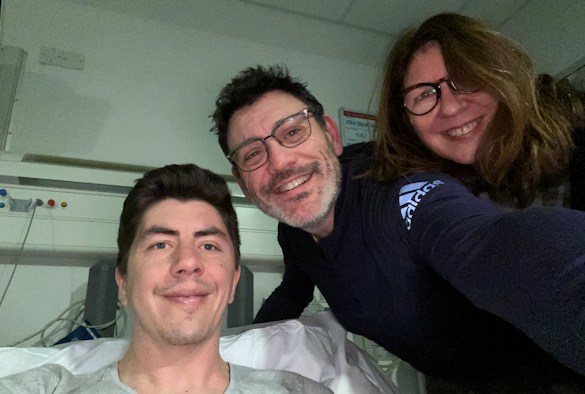 Huw has recovered well from surgery and is about to begin an intensive course of radiotherapy and chemotherapy at The Christie in Manchester.

Andrew and Huw previously completed the Manchester Half Marathon together, to raise money for The Christie, after his wife and Huw’s mum Jackie Carter, 58, was treated for breast cancer. With Jackie currently clear, the family faces another battle with cancer.  Jackie has accompanied her son to appointments on the day ward, with which she is all too familiar.

Andrew said: “Our daughter Beth is 20 and sadly one of her school friends died from a brain tumour four years ago. My maternal grandmother also suffered a brain tumour while I was young but I was shocked to discover just how common and indiscriminate the disease is and how little funding has historically gone into this vital area of cancer research. It is totally unacceptable.”

Andrew started running three years ago, discovering it was a good way to lose weight and improve his heart rate. Having run the Liverpool Half Marathon before, this time he is hoping it will be a good way of raising money to help find a brain tumour cure.

He said: “I wanted to do something to show our appreciation to all involved in Huw’s treatment and to raise the profile of this amazing charity that funds research into this important area of medicine.

“I have been really amazed by the breadth of people who have donated and their generosity. I initially seat a notional target of £400 but I’ve already smashed that and my total currently stands at over £3,400. It’s all thanks to the support of our friends, colleagues and family, who’ve been touched by Huw’s story. 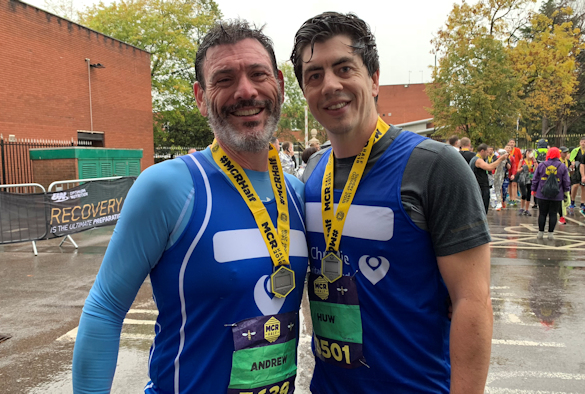 Andrew is a devoted Coventry City F.C. fan. And after one of the supporter message boards retweeted his fundraising page, he received donations from fellow Sky Blues fans, some of whom he has never met. His fundraising has also won the support of his ex-Premier League footballer  and media star Robbie Savage. The Welsh football pundit, who knows Andrew from their gym and who employed one of Andrew’s former students, retweeted the JustGiving page to his 1.7 million followers.

Brain Tumour Research funds sustainable research at dedicated Centres of Excellence in the UK; it also campaigns for the Government and the larger cancer charities to invest more in research into brain tumours in order to speed up new treatments for patients and, ultimately, to find a cure. The charity is calling for an annual spend of £35m in order to improve survival rates and patient outcomes in line with other cancers such as breast cancer and leukaemia.

Matthew Price, Community Fundraising Manager at Brain Tumour Research, said: “We were so sorry to hear about Huw’s diagnosis and wish him all the best as he starts the next stage of his treatment. Brain tumours are indiscriminate; they can affect anyone, at any age, at any time. Huw’s story reminds us that so much more needs to be done to achieve parity of funding with other cancers.

“We are incredibly grateful to Andrew for taking on this challenge to raise vital funds to help find a cure. We hope people will continue to dig deep in support of his amazing efforts and consider taking on their own challenge to spread the word about this terrible disease.”

Liverpool Half Marathon is a mostly flat course – apart from one short hill at mile one – taking 5,000 runners across the city’s famous skyline; taking in the Liver Building, Cunard Building and Port of Liverpool Building. Runners also race through the city’s oldest park and finish with a four-mile run along the promenade, overlooking the River Mersey.

To donate to Brain Tumour Research via Andrew’s page, go to: https://www.justgiving.com/fundraising/Andrew-Russell37