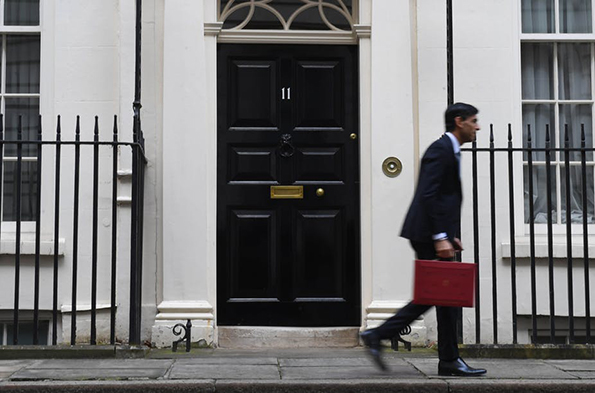 With the British public increasingly anxious about the COVID-19 pandemic and business leaders’ confidence in the economy sinking, it comes as no surprise that the UK budget is a targeted effort to alleviate the economic headwinds of the virus. The UK’s newly appointed chancellor of the exchequer, Rishi Sunak, opted for a £30 billion fiscal expansion plan – widening the government deficit with extra spending – to provide stimulus and avert a significant slump.

The Bank of England earlier announced an emergency 0.5 percentage points cut to the interest rate to 0.25%, which has enhanced the scope for ultra-cheap government borrowing in order to invest and support the economy. Sunak’s first budget duly proposes to considerably raise public sector net borrowing, the government’s measure of budget deficit, by offering an effective blank cheque to the health service and some chunky support to businesses and the UK workforce.

Of course, all these numbers assume quite a rosy economic performance – if GDP flatlines or declines, the picture will look rather different. Much of this depends on the severity of economic effect of the coronavirus, but also whether the Bank of England and the new government measures have the desired effect. In the midst of several weeks of world market turmoil, it had already been announced that GDP in January was weaker than had been expected. All in all, it is hard to see the government’s debt forecasts coming true.

Diseases cause panic and take a significant social and economic toll. Between 1348 and 1350, for instance, the Black Death killed between one-third and half of the population in England. It also triggered, according to Bank of England historical data, a dramatic cumulative GDP fall of 29% and an increase in the price of gold by 8% between 1348 and 1351, which may have reflected the same sort of flight to safety that causes the gold price to rise during economic crises nowadays.

Certainly, we see parallels with today’s economic situation. As stock markets drop on fears of a coronavirus-related economic slump, the “flight-to-safety” investment strategy repeats itself. The price of gold has gone up by about 10% since the beginning of the year.

To combat this, the interventions from the government and Bank of England reverse the austerity approach of the previous two Tory governments. Where they focused on cutting the deficit, the new thinking is that increased public borrowing will allow the government to support the economy through extra investment. This is in line with a growing consensus around the world that fiscal expansion will be an important tool to help keep the global economy afloat – along with multiple interventions from central banks.

Public sector investment in the UK is forecast to rise, net of depreciation, to almost the 3% “fiscal rule” target that was proposed by Sajid Javid a few months ago. This includes, I was very pleased to see, an increase in research and development spending to £22 billion a year, the highest as a percentage of GDP in 40 years.

Critics will argue that extra borrowing, combined with the very real risk of a “no-deal” Brexit, will force the credit ratings agencies to downgrade Britain’s creditworthiness if the economy underperforms. This would potentially trigger an increase in borrowing costs, which would financially squeeze both the public sector and British companies.

But it would not necessarily play out like that. Colleagues and I have recently shown that GDP per capita provides a “safety net” from such credit downgrades: the UK’s GDP per capita is higher than that of fellow G7 economies Japan, France and Italy, as well as the average of the world’s 37 most advanced economies, so the UK is unlikely to be among the first to be targeted.

A question of growth

The other big unknown that will affect the country’s creditworthiness is how the coronavirus will affect the UK economy. The weak January data have not done anything to increase optimism. The Office for Budget Responsibility is predicting growth of 1.1% in 2020 and 1.8% in 2021, though the chancellor acknowledged that this doesn’t take account of the latest developments in the coronavirus crisis. The OECD’s very recently forecast 0.8% growth, may also be optimistic – it is certainly out of kilter with the fall of roughly 20% in the FTSE 100 since January.

The outgoing governor of the Bank of England, Mark Carney, recently said that the impact of the outbreak could be large but temporary. How temporary is temporary? A reliable predictor of UK growth is the UK financial stress indicator, which pools information from the volatility of the exchange rate, stock market and bond market as well as the risk premium that investors demand to hold UK corporate bonds rather than the less risky UK government bonds.

The latest data, which does not yet take into account the sharp market correction in late February/early March, confirms that financial stress is on the rise compared to early-mid 2019. Historically, this signals a slowdown in UK growth for between one and three financial quarterly periods. This helps explain the moves by the government and Bank of England to stimulate the economy.

To further encourage lending, the central bank also loosened the rules about how much capital UK banks have to hold, and guaranteed the new rate would be available for four years. And Carney signalled that more quantitative easing – the policy of creating extra money with which to buy government bonds and other financial assets – was a strong possibility.

Clearly, the central bank and government are firing a heavy slug of ammunition at the problem. The Bank of England’s logic in moving quickly is that it takes anywhere from three months to two years for monetary stimulus to lift the economy. These moves should certainly help the economy. But the fact that it was already struggling before the outbreak suggests that an interest rate cut and the government’s fiscal expansion moves are not enough.

We need to urgently restore consumer and business confidence. If we can successfully contain the coronavirus outbreak, it will certainly help. But with the deadline for a Brexit deal only nine months away, that has the potential to further destabilise the economy. A deal with the EU is surely now the only way forward. Perhaps the coronavirus outbreak will help clarify this for the government. The twin measures from the central bank and government mean that if the situation worsens, we will have very little extra ammunition left to support the economy should a “no deal” Brexit crop up later in the year.