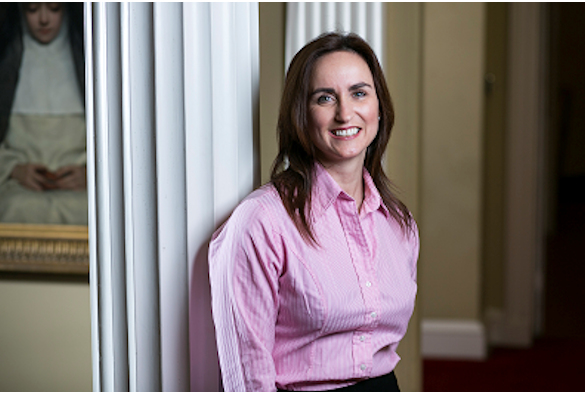 Carmel Booth, a University of Liverpool graduate who made her name as an adviser on a host of major infrastructure projects – from the development of the Liverpool waterfront to the London Olympics – has been appointed as the new President of the University Council. She is the first woman to chair the University’s pre-eminent decision-making body.

Born and now based in Liverpool, Carmel graduated from the University in 1995 with a first class honours degree in Geography before going onto forge a career in which she has become a regular adviser to governments and other public bodies on infrastructure and economic growth.

Most recently she has advised the Government of Jersey on transformation programmes and advised on major transport and regeneration schemes in London. Previously she has supported landmark developments in Liverpool city region, including the Mersey Gateway bridge and the waterfront arena and museum.

Carmel returned to the University as a member of Council in 2016 and has been Vice-President since Summer 2019. She will take up the role of President on an initial three-year term when the Earl of Derby, DL steps down at the end of July.

Commenting on her appointment Carmel said: “Having moved away from Liverpool as a child I am one of the many people who decided to come here to study and then made it my home. It is a great privilege and responsibility to now be appointed as President of the University that attracted me here as a student.

“I’ve been fortunate to be involved through my career in some exciting projects all over the country but I have always been particularly keen to help Liverpool capitalise on its strengths as a city. The University is one of those strengths and carries the Liverpool name all over the world thanks to the impact of its alumni and the ground-breaking research delivered by its staff.

“I very much look forward to working with colleagues in the University and across the city region to further build on its success in my term as President.”

The current President, Lord Derby, said: “Carmel has made an invaluable contribution since joining the University governing Council in 2016 and, through her extensive professional achievements, she is an outstanding role model for students past, present and future. I know that I will be leaving the Council in safe hands when I step down in the summer and look forward to the continued success of the University during her tenure.”