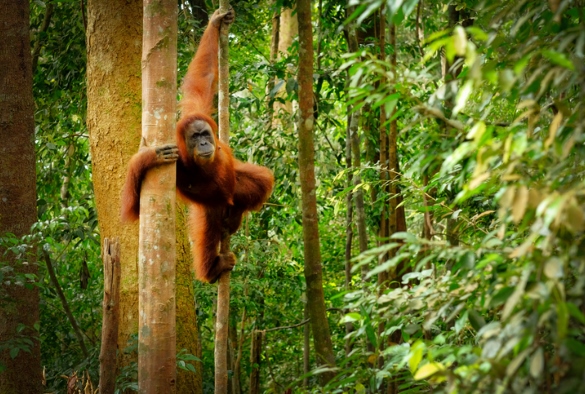 An international team of researchers, including academics from the University of Liverpool, are working to help identify priority forest areas for protection on Borneo.

The government of the State of Sabah in Malaysian Borneo has set an ambitious target of securing 30% of Sabah’s land area under protection by 2025. The study, published in Conservation Biology, identifies important forest areas across the state that are critical for protection. These areas are rich in threatened rainforest animals and plants. The forests also store large amounts of carbon, helping to slow global warming.

In total, the priority forests that have been identified are almost twice the size of the Yorkshire Dales National Park in the UK.

A software tool called Condatis, developed by University of Liverpool researcher Dr Jenny Hodgson, was used in the study to help identify the best pathways for forest connectivity.

Dr Hodgson said: “This is the first study to use the Condatis method alongside a range of other conservation priorities to arrive at a comprehensive state-wide plan. What’s remarkable is that we don’t have to stint on the conservation of species’ existing strongholds in order to conserve corridors – there really are win-win solutions.”

Lead author, Dr Sara Williams from the University of Montana said: “What makes our study different is that the research is being used to inform conservation planning decisions about to be taken by government agencies.

“The priority forest areas account for 5% of the land area of the State of Sabah. The approach that we came up with, selecting areas for protection strategically rather than randomly, protects around 12% of most of the state-wide conservation features that we were interested in, which includes species ranges, forest carbon and landscape connectivity. This therefore more than doubles conservation efforts.”

Creating land corridors that link protected areas together will mean animals can move, for example from the large parks across the Indonesian border into the flagship conservation areas in the centre of Sabah.

Dr Sarah Scriven, from the University of York said: “Allowing species to move from the hottest lowland areas to the cooler mountains will be especially important for conserving rainforest species in the long term, as they will need to keep up with a warming climate.”

Dr Jedediah Brodie from the University of Montana said: “Protected areas are generally situated based on scenic beauty or political expediency, but putting new protected areas in the best places for biodiversity, as we’ve done here, more than doubles their conservation benefits.”